British Battleships of 1870 Part IV The Warrior and Black Prince 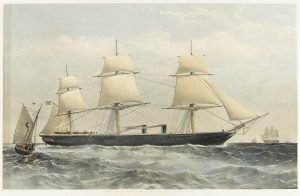 The Warrior, and her sister Black Prince, were radically innovative armoured ships and were the equals of all other existing battleships put together. Built in response to the French Gloire, Warrior’s innovation lay in armour protection, high length to beam ratio, iron structure and internal sub-division. She was heavily armed with a combination of heavy calibre muzzle and breach loaders (32 of them rifled). Her speed and endurance were unsurpassed for a decade. She had four massive anchors and chain tackle to weigh them. Her boat arrangements were generous and set the standard for many years. Under sail she was fast but unhandy, on one occasion colliding with the Royal Oak off the Scillies. Built on the Thames, she finally paid off in 1884, becoming a hulk at Portsmouth and; later, Milford Haven. Black Prince served in the fleet until 1880, when she went into reserve. In 1896 she became a harbour training ship and was scrapped in 1923.

Filed under: Other (Nineteenth C) | Other (location)
Subjects include: Shipbuilding & Design | Weapons