Bulk Carriers and Timber Imports: The British North American Trade and the Shipping Boom of 1824-5 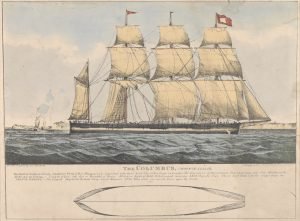 In the early 19c, a tariff differential was introduced heavily weighted in favour of colonial timber. It led to a post-war economic boom in timber imports from North America. “Columbus”, a huge four-masted barque, comprised 10,000 tons of timber including the hull which was designed to be broken up and sold on arrival, avoiding import duty. The jerry-built leviathan arrived in Blackwall to public amazement. The profits were enormous. A second huge vessel “Baron of Renfrew” comprising 15,000 tons of timber crossed the Atlantic but ran aground on the Goodwin Sands, breaking up. No further huge disposable vessels were built.