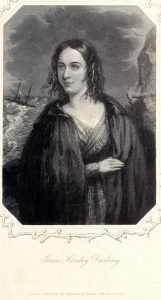 One of the most celebrated sea rescues took place on 7 September 1838; when Grace Darling and her father William, the Longstone lighthouse-keeper, rescued nine of eighteen survivors from the S.S. Forfarshire, wrecked on the Big Harcar rock in the Farnes Group in a raging gale. Piecing together the conflicting accounts of the disaster and rescue, the author narrates a tale of complacency and cowardice by some of the ship’s officers mixed with the suffering of the few survivors and the bravery of the Darlings in rowing the lighthouse coble to the rock and rescuing the survivors.