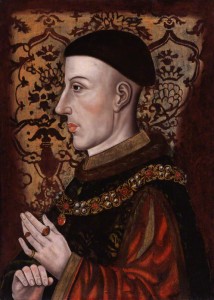 Grace Dieu was  ready for service in 1420.  A recently-found document indicates that she sailed from Southampton with the Earl of Devon’ s expedition to “keep the seas”.   The King’s Council commissioned two gentlemen to take the muster of mariners and soldiers.  The Grace Dieu leaders flatly refused and the crew rose up, insulted, maltreated and compelled the commissioners to sail to St Helen’s on the Isle of Wight.  No reason is given. There is no evidence of unseaworthiness and contemporaries regarded the ship as successful, though she was subsequently laid up in the Hamble where she still survives and is maintained by English Heritage.