The SNR and HMS Victory

By 1911 when the SNR was founded the Victory was already in a very poor state. The Admiralty was responsible for her upkeep, but paid her no special attention as can be seen from the prints and photographs in which she featured. Although venerated as Nelson’s flagship, there was no attempt to keep her in Trafalgar rig. Indeed after decommissioning she received all the refits and general maintenance to maintain her in the role of tender to HMS Wellington, guardship or stationary flagship at various times. Visitors were allowed on board when it was convenient between the duties she now fulfilled.

Royal interest was always there, and royal visits were reported in the newspapers and court circular. This boosted public interest in the ship, and despite the fact that the only access open to visitors was by boat from the Hard or other landings, the visit of Princess Victoria on 18 July 1833 boosted visitor numbers to between 10,000 and 12,000 in the years after her visit. The Princess met many officers who had served at Trafalgar or with Nelson. On her second visit on 21 October 1844, the Queen was reported to have kept as souvenirs leaves from the wreaths laid on the deck. On this occasion visitor figures were boosted to 22,000.

During these years the ship was given few large repairs, and by 1886 Sir Edward Seymour said of the Victory that ‘a more rotten ship … never flew the pennant. I could literally run my walking stick through her sides in many places.’ A year later a catastrophic leak proved the accuracy of this assessment. The ship had to be hastily docked and given emergency repairs. A second emergency occurred in 1903 when the Victory was rammed by HMS Neptune which was under tow en route to the breakers. After both of these incidents Victory resumed her berth in harbour, but her condition continued to give cause for concern. In 1922 when she was again docked for restoration it was clear that the concern has been justified.

From 1905, at the time of the centenary of the battle of Trafalgar, public interest in the rapid disappearance of the wooden nineteenth century was aroused. The first intervention of the Society took place when the Society’s President, the Marquess of Milford Haven, consulted the Admiralty. At an SNR meeting in April 1921 he put the matter before members, and reported that ‘the venerable naval relic, HMS Victory, was no longer able to hold her moorings safely and needed immediate attention … The Admiralty .. had no available funds for restoration work of the kind required, and therefore, if Nelson’s flagship was to be saved, it would have to be by private enterprise.’ Members agreed that estimates ‘should be obtained as to the probable cost of preserving HMS Victory as a national possession …’. This set in train the events which preserved the ship and eventually saw the Society accepting the role of fund raiser and technical advisor.

Funding the repairs was the first problem to be faced, before questions about restoration or repair could be asked. The Save The Victory Fund (STVF) was inaugurated by the SNR on Trafalgar Day 1922. The Chairman of the Committee was the Admiral of the fleet Sir Doveton Sturdee, who had succeeded the Marquess of Milford Haven as President of the SNR after his sudden death. The Committee was made up of 50 members from the peerage, services, business, the theatrical profession as well as the High Commissioners for Australia, Canada, New Zealand and South Africa. Despite wide publicity fundraising was slow to gather momentum, and it was the generosity of James Caird which permitted repairs to begin in 1923.

Funds came in from a huge variety of activities, ranging from fund raising at theatres in London, a Victory Medal made from copper recovered from the Ship during repairs, to a souvenir stall run by the SNR in Portsmouth. In 1923 a film ‘The Romance of HMS Victory’ had been devised by Geoffrey Callendar, Secretary of the SNR, and given at a command performance at the Alhambra Theatre, Leicester Square. Eventually the Secretary of the STVF was able to report that an average of £130 a day was being received. By 1925 Sir Doveton Sturdee was able to report to the AGM of the SNR that £100,000 had been raised. When restoration was complete £105,550 had been raised, of which £100,143 had been spent on the Victory, and only £3,756 on fundraising, administration and research.

In 1922 Victory was moved into dry dock ‘with great difficulty’, it became clear that the cost of restoration would be far beyond what the Admiralty could find. Fund raising continued, while the Society set up the Victory Technical Committee, composed mainly of SNR members, to establish how to restore Victory to ‘Trafalgar condition’. Rigorous research was undertaken to establish exactly what this meant, and accurate plans were required of the ship’s present and proposed condition.

By 1924 the SNR looked ahead to a period after the restoration, and planned that the STVF might become a permanent endowment for the Victory should a surplus be left over at the end of repairs. In 1928 King George V visited the ship to celebrate the end of the restoration, and the Society planned long-term preservation instead. This included plans for the small museum of Nelson and other naval relics which could not be returned to the ship. A new museum was therefore required, and funds were set aside for this. The Old Rigging House was identified as suitable, plans were drawn up for an extension to the building, and the King returned to Portsmouth to open the new annex in 1930. The annex housed the panorama of the Battle of Trafalgar painted by the distinguished marine artist W.L. Wyllie, a founder member of the SNR, who had chaired its first meeting at the Royal United Services Institute in 1910. The public was charged 2d for admission to the panorama, and this brought in a small but steady income. Although the SNR had taken responsibility for raising the money for the new museum, it was not clear who would run it. The museum opened in 1938 and a year later had to close on the outbreak of war.

In 1938 the decision had been taken that the commanding officer of HMS Victory would also serve as curator to the Museum, while the trustees of the newly founded National Maritime Museum took responsibility for the collection of artefacts. After the war the first full-time curator was appointed, and in 1971 the SNR transferred the Victory Gallery and its contents to the Ministry of Defence to constitute the new Royal Naval Museum. The SNR retained an ex-officio seat in the new Board of Trustees, as it did also on the board of the new Royal Naval Museum Trading Company, set up to replace the shop that had grown out of the souvenir stall sited at the foot of the Victory’s gang way. The SNR gave grants totalling £100,000 to Phase One of the development plan for the Nelson and Victory Galleries and the conservation of Wyllie’s panorama.

The financial support of the SNR and the STVF continued without a break and by the Trafalgar bi-centenary in 2005 the total was over a million pounds. The ship had been save from disintegration, conserved, and opened to the public. Technical expertise had now moved forward so that there was a greater understanding of the present and future needs of the Victory. Comprehensive surveys of the ship showed that there was significant downward movement of the structure as a whole relative to the keel support. Plans to correct this were part of a much wider programme of conservation devised by EURA Conservation, working closely with the ship’s keeper and curator and the VATC.

On 29 March 2012 the National Museum of the Royal Navy accepted the ship into the HMS Victory Preservation Trust, under the care of the HMS Victory Preservation Trust. The Victory Technical Committee took over from the VATC, chaired by Martyn Heighton, a member of the SNR Council and supported by Jonathan Coad, former chair of the VATC. The new committee established and implemented a technical advisory structure to bring together independent technical advice and professional expertise of the highest quality in the conservation of eighteenth century wooden ships.

The work now falls into three categories: stabilisation, improving understanding and assessing significance. Many of the structural issues result from water ingress, and making the ship weathertight has cost £220,000. The SNR has been instrumental in funding surveys to improve understanding of Victory as an artefact. An SNR grant of £242,734 made it possible to perform a fabric and timber mark survey in 2012, as a result of which the largest collection of timbermarks from any ship from the age of sail has been documented; it has provided strong evidence for dating the ship’s elements; it will be critical to inform the development of the Conservation Management Plan; it will focus attention on the options for dendrochronology; it will provide benchmarks for the paint survey which will follow in 2014. The paint survey funded by the SNR will take place this year.

This video shows a 3D model created from Laser Scan data by heritage specialists the Downland Partnership. The survey was funded by the SNR. The survey forms the first step in a complete restoration of the ship with involvement from BAE Systems, the MOD and Fenton Holloway Ltd.

Images Of Victory & Her Restoration 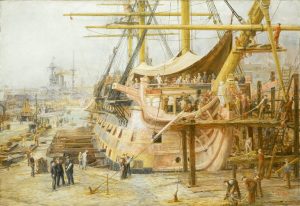 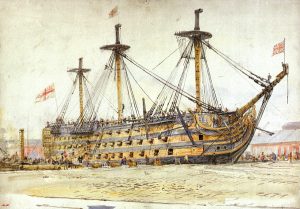