Jutland, or a Second ‘Glorious First of June’

Since May 31, 1916 few naval battles have been as controversial as Jutland. Who was to blame for the Grand Fleet’s performance: Jellicoe, Beatty, the weather, the ammunition, the time of day/night has been a matter of debate ever since. This article debates several scenarios and asks “What if?” If Jellicoe was hoping to repeat the ‘Glorious First of June’ he missed his chance. 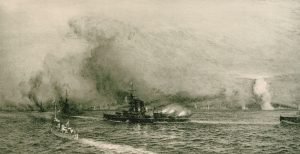