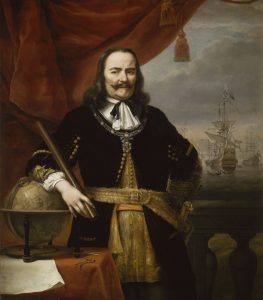 Seventeenth Century Dutch Admiral, Michiel Adrianszoon De Ruyter is regarded as one of history’s greatest Admirals and as a national hero of the Netherlands. Beginning life at sea as a cabin boy and ending his career a revered fleet commander during the Dutch Wars, he fought in over fifty sea battles (including the extraordinary raid on the Medway), earned himself a personal fortune as a merchant mariner and played a significant role in reforming the seventeenth century Dutch Navy. This article presents a succinct biography of the man with particular focus on how he was viewed by British contemporaries amongt whom he evoked both considerable anxiety and admiration.