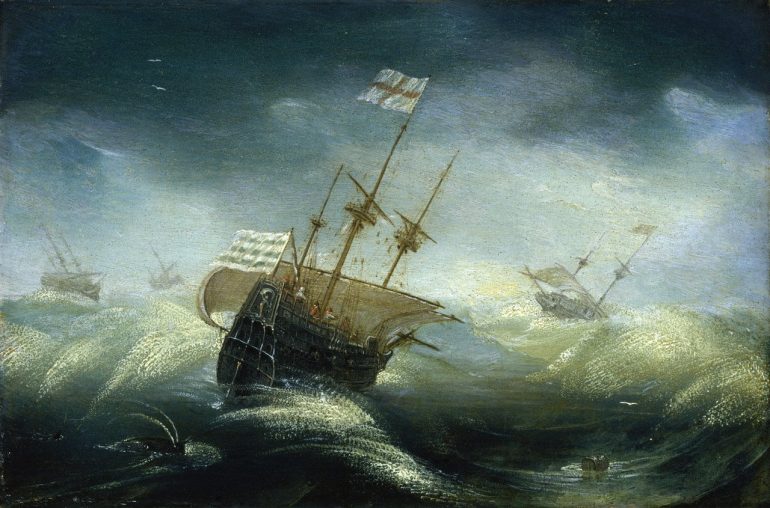 This painting is part of the extraordinary collection of early Netherlandish marine paintings collected by Captain Eric Palmer and purchased in 1963 with the assistance of the Society from his widow.

This panel was purchased from the collection at Ham House near Richmond, the residence of William Murray, a close childhood friend of Charles I. Ham House is now a property maintained by the National Trust. In spite of numerous sales before it came into the safe hands of the National Trust, the Ham House collection is still a seventeenth century treasure trove. The collection can be searched in its entirety HERE.

This painting hung in the ‘Green Closet’ a room set aside by Murray for his most prized possessions and there is documentary evidence that it was there from 1683.

Porcellis was probably born in Ghent around 1584 and was widely admired by his contemporaries. Samuel Van Hoogstraten (1627-78) described him as ‘the great Raphael of sea painting.’

It is likely that this panel was painted during his residency in London in 1606. A sophisticated allegory, there are numerous points of interest. A fleet of merchant vessels is caught in a storm; the ship in the foreground has clear associations with the English crown as she flies the St George flag and possibly, at her stern, the East India Company flag – it is likely she is a merchantman. The figure of Fortune is carved on her stern; she is chased through the water by a sea monster off her port quarter; a lone barrel bobs to starboard; the crew strive for vigilance on board.