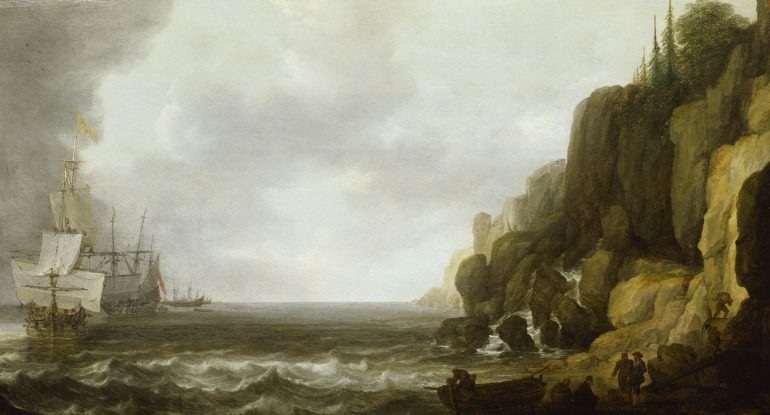 Simon de Viegler was one of the most influential of the Dutch school of marine artists. A contemporary of Willem Van de Velde the Elder, Viegler moved maritime art in an exciting new direction with greater and more sophisticated and realistic use of colour whilst maintaining faithful technical accuracy in his depiction of ships and rigging. He was a major influence in the development of the style of Willem van de Velde the Younger who in turn set new standards in the depiction of the maritime environment.

This image, which shows a squadron of Dutch ships at anchor is remarkable for the variation in sea conditions depicted. Towards the horizon the sea is smooth and even whilst in the foreground waves rise up in the shallow waters and the lines of swell are as carefully depicted as the ships themselves. He has even been careful to depict another type of water flow – a river cascading as a waterfall in another distinctive style to the right amongst the cliffs.

The ship in the foreground is drying her sails whilst sailors work in the rigging. Her Dutch flag is clearly visible. The men on the shore have come by boat from the squadron and are clearly shown shooting and skinning the wild goats to feed the crew.

If you would like to read more about the context of Dutch shipping in this period, read this fascinating Mariner’s Mirror article from 1950 which explains how, by the middle of the seventeenth century, Dutch men-of-war were superior to those of the English.

This painting is part of the extraordinary collection of early Netherlandish marine paintings collected by Captain Eric Palmer and purchased in 1963 with the assistance of the Society from his widow.