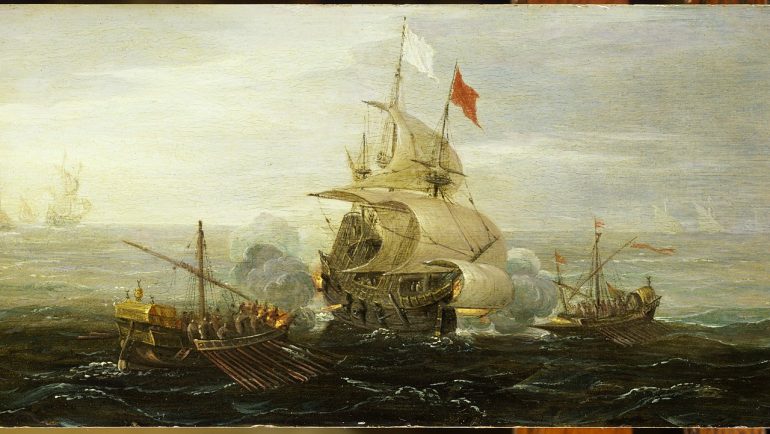 This tiny seascape forms a part of a collection of 79 early Netherlandish marine paintings purchased in 1963 with the assistance of the Society from the widow of Captain Eric Palmer.

Eric Palmer (1896–1961), a great character, was one of the Palmer shipbuilding family and was long connected with the Museum as its advisor on the early Netherlandish school. He amassed both a great collection and great self-taught knowledge after previously collecting old masters, which he disposed of when his interest changed to maritime art.

This painting is remarkable for its small size, measuring only 15 x 33.5 cm. Its subject is a French armed merchant ship under attack from two galleys which fly the Turkish crescent and which are also decorated with crescents on their stern lanterns and finials. The white Bourbon flag flying from the merchantman’s mainmast is what suggests her identity is French.

The same scene is depicted at different stages in the left and right background where the galleys can be clearly seen with their distinctive lateen sails set.

Such images of Barbary pirates attacking trade were very popular in Dutch and Flemish painting throughout the seventeenth century. For more on the history of Barbary Corsairs see these articles in The Mariner’s Mirror and if you can help an enquiry regarding miniature naval art please follow this link to our Free Forum.

The artist Aert Anthonisz, was born in Antwerp in 1579 or 1580 but spent most of his working life in Amsterdam where it is believed that he studied under the talented marine artist Hendrik Cornelisz Vroom.