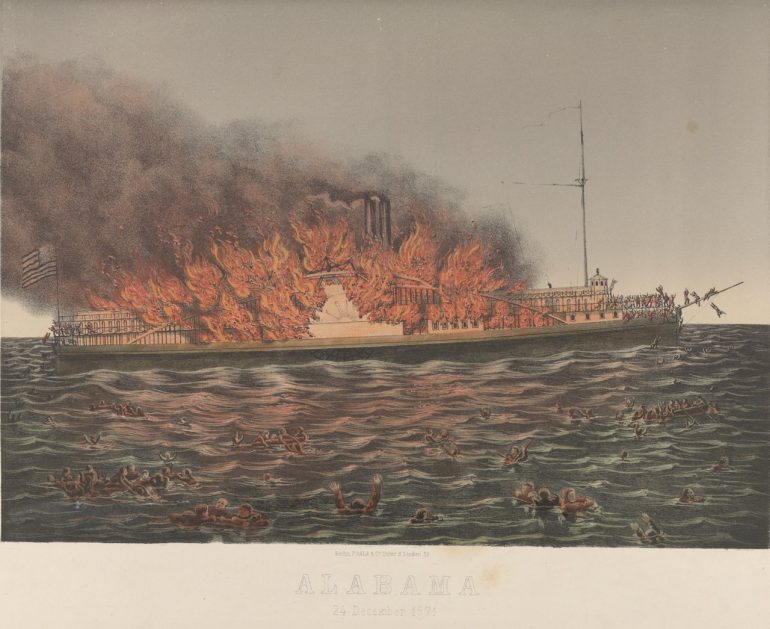 This interesting lithograph inscribed Berlin, F. Sala & Co purports to show an American wooden paddle steamer called the Alabama on 24 December 1871. In one book, Mail and Passenger Steamships of the XIXth Century (eds Captain H. Parker and Frank C. Bowen) she is described as being built in New York in 1850 for the coastal passenger service and maintained by the New York and Savannah Line. A very large craft, some 220 feet long and 1,300 tons she was propelled by a vertical beam engine.

The print is a clear depiction of the steamship suffering a catastrophic fire, shown from her starboard side being consumed by flames. It appears that the flames may be originating from the area around the paddle, perhaps the engine, before travelling the length of the ship. Passengers hurl themselves to safety off bow and stern while others struggle for survival in the water while a small boat, clearly inadequate for the task, helps survivors out of the water. Perhaps her loss on Christmas Eve made this shipwreck particularly famous.

We have, however, been unable to find any more information concerning this dramatic fire, presumably which led to the loss of the vessel, and any help would be gratefully appreciated. A strand on our Free Forum has been begun to enable discussion.

For those interested in the technology of the paddle ship, this important Mariner’s Mirror article from 1958 explores the transition from paddle wheel to screw propeller and the government reaction to the new dangers of such technology, so vividly depicted in this lithograph, is also explored in a more recent article ‘The Steamboat, Safety and the State: Government Reaction to New Technology in a Period of Laissez-Faire‘.

The following is an import at reply on this topic from our Free Forum, authored by David Hepper.

‘I suspect that the ship has indeed been misidentified. The paddle steamer that was destroyed by fire on 24 December 1871 was the America, but possibly originally named Alabama.
Several British newspapers reported the incident at the end of January 1872, evidently when the news reached Europe. The majority of reports are very similar, stating that a large proportion of the passengers were German – which probably explains the origin of the lithograph.
It would appear that the disaster apparently happened after a burst steam pipe and a subsequent fire which rapidly took hold. As the fire spread panic ensued and there was an unseemly rush for lifeboats and rafts, and it was ‘every man for himself’.
The number of those lost seems to vary in the reports from 80 to over 100. Most reports claimed that the steamer was employed as a ferry between Buenos Ayres and Montevideo and was Italian owned.
(source: British Library/ British Newspaper Archive: various newspapers, i.e. Yorkshire Post 27 January; Pall Mall Gazette 30 January; Belfast Newsletter 2 February).
I have not found the origin of the America, but was possibly the Alabama referred to in the lithograph?
If so, then she was built at New York in 1850-51 and served with the US Navy 1861 – 65 as the USS Alabama, and was then sold out of service. According to the Dictionary of American Fighting Ships she was ‘destroyed by fire, probably sometime in 1878, but the details of her destruction are not known’.
(See: http://www.history.navy.mil/research/histories/ship-histories/danfs/a/alabama-i.html)