Boats of the Boulogne Flotilla for the Invasion of England, 1803 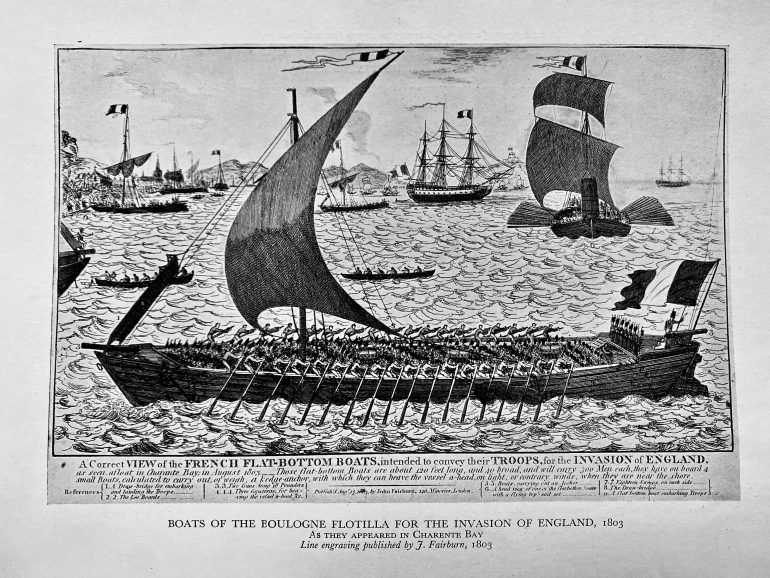 ‘A correct view of the French Flat-Bottom Boats intended to convey their troops for the invasion of England, as seen afloat in Charante Bay in August 1803 – these flat bottom boats are about 120 feet long, and 40 broad and will carry 300 Men each, they have on board 4 small boats, calculated to carry our or weigh a kedge-anchor, with which they can heave the vessel a-head on light or contrary winds, when they are near the shore’

An anonymous print, published by John Fairburn in 1803, published a matter of weeks after the French army was organised for the proposed invasion of Britain, and was named L’Armée d’Angleterre. It was a time of intense anxiety in England and intense preparation in France. Napoleon’s army, 200,000 strong, was gathered and trained at camps at Boulogne, Bruges and Montreuil. The fleet to transport them to England was not just constructed in Charante as depicted here, but along the entire northern coast of France and into the Netherlands. Napoleon’s invasion plan was to distract the Royal Navy by sending squadrons of his navy across the Atlantic to the West Indies, luring the Royal Navy away and leaving the Channel – in theory – unprotected. His plan was wholly unseated in the realities of naval warfare.

The Society has published a number of articles on this important period in the Napoleonic Wars including ‘Kite Balloon Ships‘, an article by D. B. Smith, published May 1927 which presents two November 1803 letters from Rear-Admiral Sir Charles Henry Knowles to the Admiralty, written during Napoleon’s preparations on the opposite coast to invade England. The letters entitle Knowles to some credit for being an original proposer of the idea of Kite Balloon ships, however amateurish his ideas.

For a French persepctive ‘A French Junior Naval Officer of the Great Wars‘ is an interesting article; and explores the experiences of Julien Piedagnel, a junior French Navy officer of the Napoleonic Wars who was captured three times and on the last occasion was held as a prisoner-of-war from 1803 to 1814. The article was prompted by an analysis of two warship drawings attributed to Piedagnel, who also produced exquisite model ships and other naval artefacts during his imprisonment. His long imprisonment brought to an end the naval career of a courageous and able officer but at different times he served the state for relatively short periods.

For a perspective on the war in the Mediterranean whilst tension rises in the Channel, Colin White’s essay ‘A Man of Business’: Nelson as Commander in Chief Mediterranean, May 1803 – January 1805‘ is very useful. The Nelson letters published in 2005 include over 500 dating from 1803-5 that demonstrate his attention to detail as well as to strategy.  Maintaining his lines of communication; encouraging his officers; prescribing operational tactics; protecting commerce; securing provisions and naval stores; organising reconnaissance and nurturing diplomatic relations: all received Nelson’s attention, together with the previously under-recognised fields of developing intelligence networks and making friends in neutral Sardinia.  Rather than being a tedious part of Nelson’s career, this period saw the mastery of his resources that enabled the fleet to respond immediately when the French sailed from Toulon.