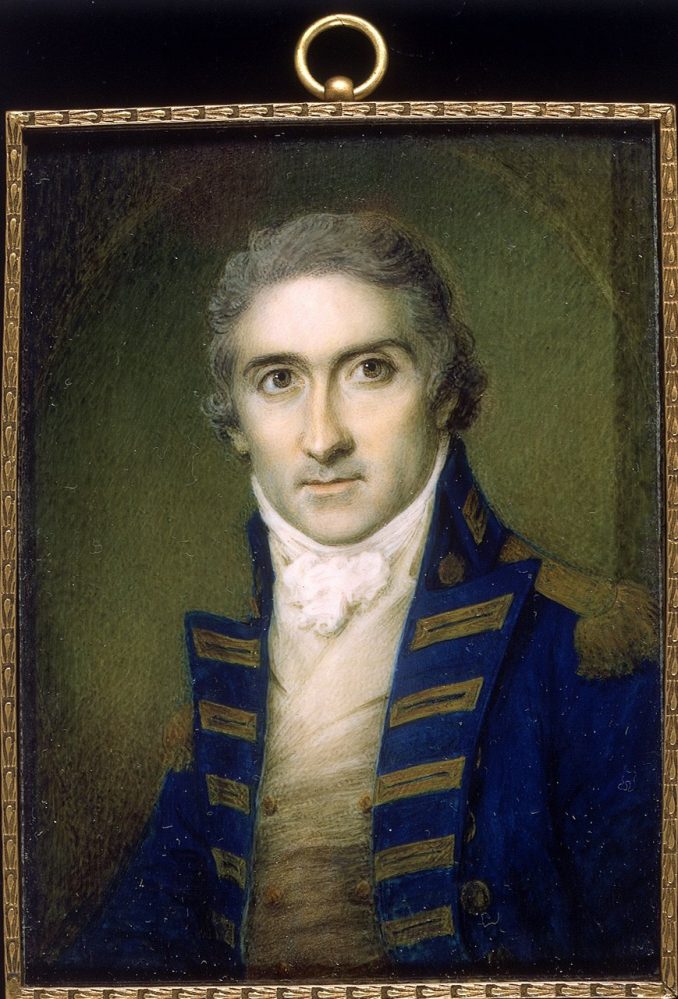 This miniature portrait is framed in gilt metal with a central suspension ring. The subject, Captain Edward Riou, is shown with greying hair and brown eyes and wears the captain’s full-dress uniform of 1795-1812 with a neckcloth and white waistcoat. The artist, Samuel Shelley was self-taught but became a prolific and well-known portraitist and miniaturist who exhibited over 200 works at the Royal Academy between 1774-1804, at the height of British seapower in the Georgian period. In 1804 Shelley helped to found the Society of Painters in Water Colours which has now become The Royal Watercolour Society.

The subject of the portrait, Edward Riou, was one of his generation’s finest officers. He sailed with James Cook on his third voyage of exploration to the Pacific, captained the Guardian to Australia during an extraordinary journey which became one of the century’s greatest survival stores, and died at the battle of Copenhagen, sailing under Horatio Nelson’s command, in 1801. A monument to Riou was erected in St Paul’s cathedral.

The Society for Nautical Research has published a number of articles on miniatures in the Mariner’s Mirror, including an article on a portrait miniature painted by John Smart of Captain William George Fairfax (1742-1811) who fought in the Battle of Camperdown. Another recent article has explored miniature ships in designed landscapes during the eighteenth and nineteenth centuries.