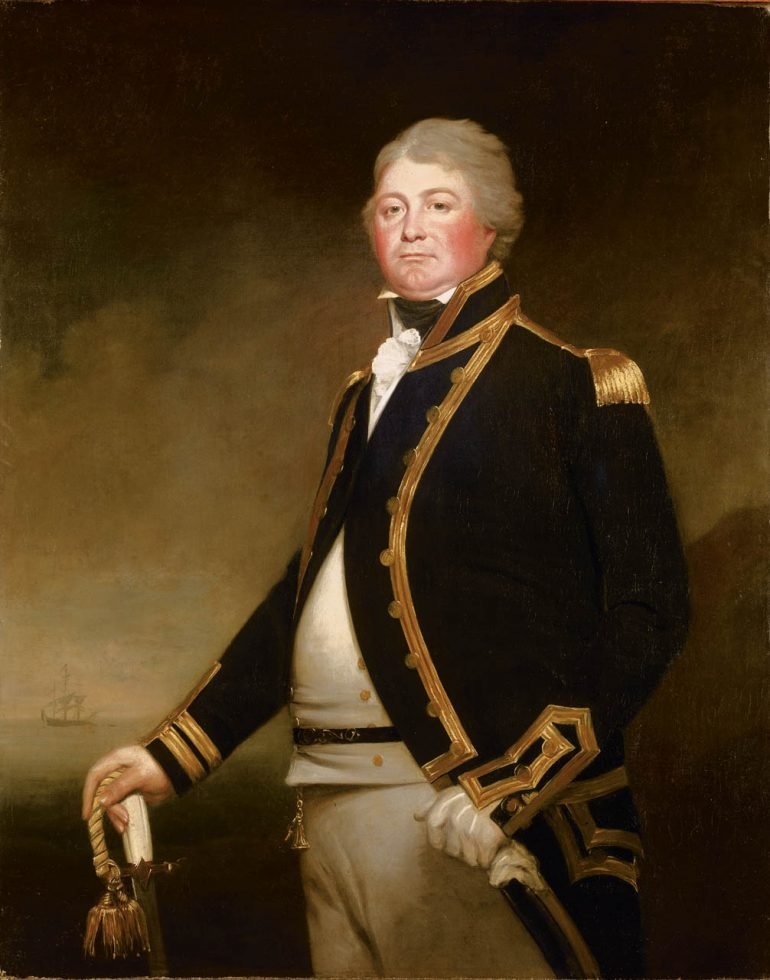 This portrait of Captain James Newman-Newman shows him wearing a captain’s full-dress uniform and was painted around 1801. By then Newman-Newman was already a distinguished naval officer, notably having served as a lieutenant on the 100-gun First Rate Royal George at the Glorious First of June in 1794, then considered the hardest-fought battle of the age.

He went on to experience numerous naval actions including, in 1800, the capture of the Pallas, a powerful and brand new French 42-gunner. The ship he commanded in that action, the Loire, is shown in the background of this portrait.

His career was cut short on Christmas Day 1811. Returning in escort of a large convoy from Gothenburg to London, the fleet got into difficulties in the shallow sand bars off the coast of Holland. Thirty merchant ships were wrecked on the Haak Sand off the Texel as well as Newman-Newman’s 74-gun Hero. All but twelve of her crew of 500 drowned.

Another high-profile victim that day was Admiral Robert Carthew Reynolds who was lost along with his flagship the Prince George. In total some 2000 British sailors died from the Royal Navy alone.

In 1801, the artist, Oliver James Archer, was one of the most fashionable portrait painters of the time, with offices in New Bond Street. A talented youth, Archer had been admitted to the Royal Academy Schools at the age of sixteen in 1790 and regularly contributed to the Royal Academy and British institution until his death in 1842, though his interest in portraits dwindled as he aged.

This portrait comes from the peak of his popularity and skill as a portrait artist and is a fine example of his skill.

The portrait was purchased for the National Maritime Museum with the assistance of the Society for Nautical Research in 1959.