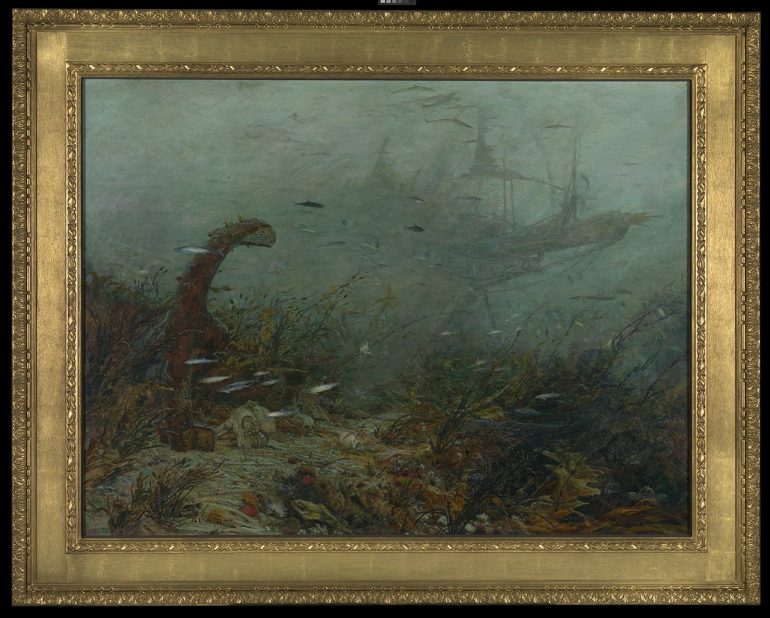 The Society has helped to buy a large collection of Wyllie art for the National Maritime Museum. This painting was bought in 2011 from a private collection.

The painting is one of four by Wyllie that was exhibited at the Royal Academy in 1890. It is an unusual composition by Wyllie because of its depiction of an underwater scene. He made a variety of studies for the picture whilst cruising in the Firth of Clyde with his family the year before, in 1889. It is understood that he went underwater using a diving helmet made from a biscuit tin. The octopus which lurks in the corner was based on several studies of one held in the Brighton aquarium. For more of Wyllie’s sealife sketches, see this study of seven fishes; this of three flying fish; and this underwater study of fish with an eel.

‘Mr Wyllie has for once left the surface of the sea in his fantastic picture called ‘Davy Jones’s Locker’ – a picture which he has boldly and literally gone to the bottom to paint. We believe that we are accurate in saying that the observations for this curious work were taken from a glazed diving-bell, and that the seaweed, the stones, the anemonies strewn about “the deeps untrampled floor” were painted from nature by this most enterprising artist. What will the modern learner not do in the pursuit of truth? Mr Wyllie has been for a Challenger expedition on his own account, and none can say that he has not found his reward in the strange assemblage of forms and colours represented in his most original picture.’

A brief article on the painting was published in the Mariner’s Mirror in May 2012.