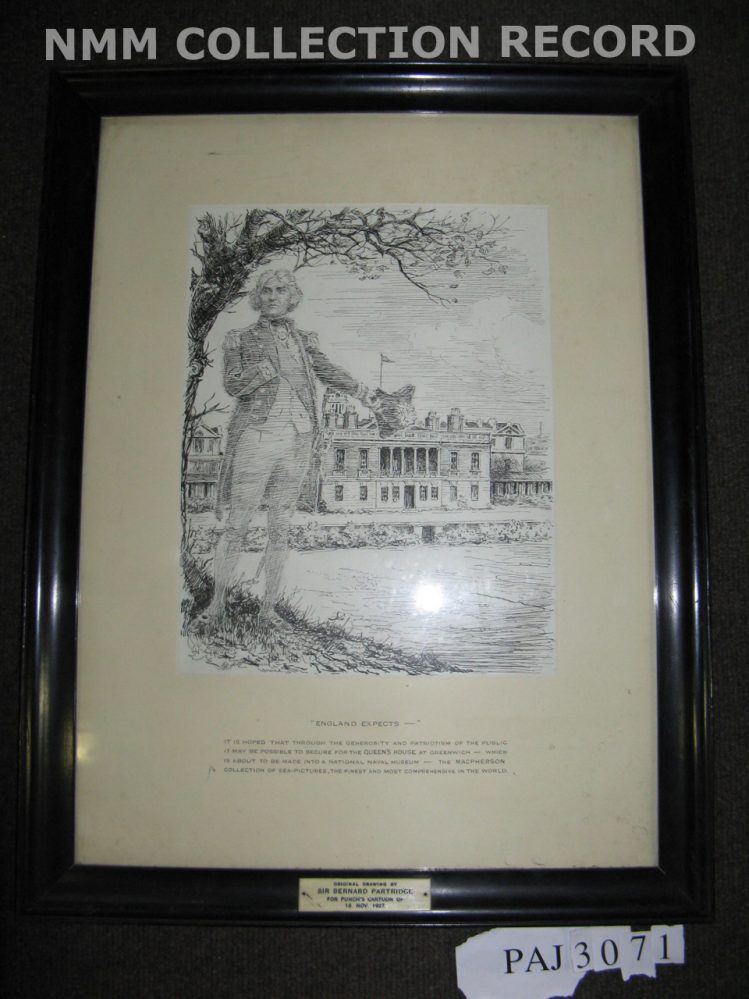 On the bottom of the mount is the caption

‘England Expects – It is hoped that through the generosity and patriotism of the public it may be possible to secure for the Queen’s House at Greenwich – which is about to be made into a National Naval Museum – the Macpherson collection of sea-pictures, the finest and most comprehensive in the world.

The drawing, published in ‘Punch’ on 16 November 1927, was part of the campaign led by the Society for Nautical Research to purchase the Macpherson Collection by public appeal. Sir Owen Seaman, editor of ‘Punch’, was a great supporter of the project. The artists, Sir (John) Bernard Partridge, 1861-1945, was a famous illustrator of the period and chief cartoonist for ‘Punch’ from 1901.

The collection would then go on to become the foundation of what became the National Maritime Museum. The entire collection was personally bought before the appeal reached its target by Sir James Caird who then gifted it in its entirety to the museum. The money raised in the appeal remained with the Society as the Macpherson Endowment Fund, which is still used to purchase works of art for the museum.

An article ‘National and Naval Nautical Museum‘ was published in the Mariner’s Mirror by Geoffrey Calendar in the summer of 1927 outlining the Society’s plans for the foundation of the museum.

Sir James Caird’s financial assistance in the purchase of art and artefacts relating to Nelson is itself the subject of a detailed article from the Mariner’s Mirror edition by Roger Quarm and published on the bicentenary of Trafalgar, in 2005: ‘Buying Nelson: Sir James Caird’s Gifts to the National Maritime Museum’

The use and manipulation of Nelson’s public image has its own long and fascinating history and is explored in an article in the Mariner’s Mirror from 2002 by Marianne Czisnik: ‘Nelson and the Nile: the Creation of Admiral Nelson’s Public Image.’