Ice Bergs near Kosoak, Life Boat Cove (From a sketch by Dr Kane) 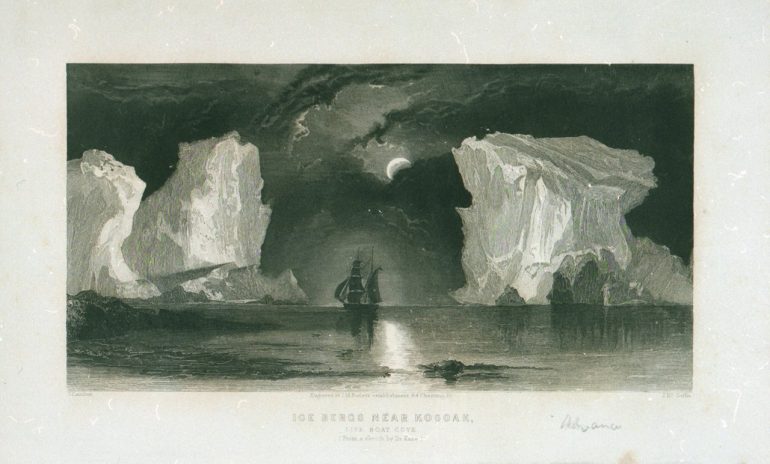 This haunting image of a brig under full sail on a still, moonlit night, dwarfed by towering icebergs, is an etching made from a sketch by Dr Elisha Kane and is one of a series of images by Kane that record the Second Grinnell expedition of 1853. That expedition was one of two that were funded by the American merchant and philanthropist Henry Grinnell and were launched in a bid to find Sir John Franklin, who had disappeared in search of the North West passage in 1847.

Kane served on the first Grinnell expedition of 1850 as a doctor, which failed to find Franklin but did find his winter camp, and then organised and led the second expedition, which became one of history’s greatest survival and exploration stories.

On the second expedition, the brig depicted here, the Advance, became encased in ice and Kane and his men spent two winters ashore trapped between Greenland and the ice pack. Eventually forced to abandon the Advance, Kane then led his men on a march to Upernavik, from where they were eventually rescued by a relief operation sent to find them.

Upon leaving the ship. Kane left the following note, explaining his decision.
‘I regard the abandonment of the brig as inevitable. We have by actual inspection but thirty-six days’ provisions, and a careful survey shows that we cannot cut more firewood without rendering our craft unseaworthy. A third winter would force us, as the only means of escaping starvation, to resort to Esquimaux habits and give up all hope of remaining by the vessel and her resources. It would therefore in no manner advance the search after Sir John Franklin.

Under any circumstances, to remain longer would be destructive to those of our little party who have already suffered from the extreme severity of the climate and its tendencies to disease. Scurvy has enfeebled more or less every man in the expedition, and an anomalous spasmodic disorder, allied to tetanus, has cost us the life of two of our most prized comrades.

I hope, speaking on the part of my companions and myself, that we have done all that we ought to do to prove our tenacity of purpose and devotion to the cause which we have undertaken. This attempt to escape by crossing the southern ice on sledges is regarded by me as an imperative duty, – the only means of saving ourselves and preserving the laboriously-earned results of the expedition.

On his return, Kane published an important account of his two expeditions ‘Arctic explorations in search of Sir John Franklin’. The book was published just two years before Kane’s death in 1857 whose health never recovered from the burden of those arctic winters. His excellent account of his expedition can be read they can be read HERE.
https://archive.org/details/arcticexploratio00kane