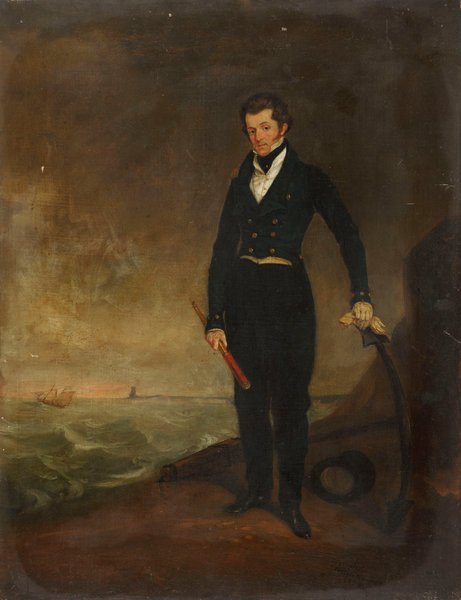 This painting is particularly interesting as an example of a maritime scene painted by an artist better known for hunting scenes and portraits of horses. Indeed, the artist, John Ferneley, is now considered to be one of British history’s great equine artists, second only to George Stubbs.

Ferneley lived in Melton Mowbray in Leicestershire, some seventy miles from the sea and the location of the development of fox hunting as a sport in the eighteenth century. Nonetheless, in this image he has taken on the challenge of painting his subject in a maritime scene – on a beach with the sea behind him with a small schooner in the background.

Fortescue, who joined the navy in 1811, is shown here in his lieutenant’s undress coat with a telescope in his right hand, his left hand wearing one glove and holding another, resting on the fluke of an anchor, and his top hat on the beach at his feet. Promoted to lieutenant in 1823, Fortescue never actually served at that rank though he had gained some good operational experience as a midshipman on the 74-gun HMS Minden at the bombardment of Algiers in 1816.

It remains unclear why or how Fortescue and Ferneley met or, indeed, why Ferneley chose for his portrait to be painted by one of the nation’s most distinguished equine artists. Do please get in touch with us if you can help!