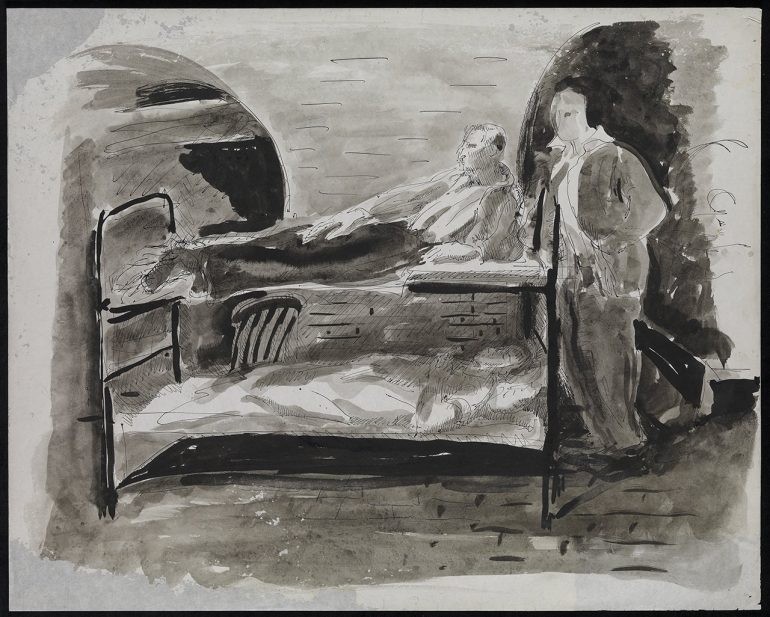 Rosemary Rutherford (1912–72) trained at the Slade School of Art and exhibited at the New English Art Club prior to the Second World War. When war broke out, aged, 27, she joined the Voluntary Aid Detachment of the Red Cross.

She performed a variety of jobs which included working as a nurse in the Royal Naval Hospitals at Chatham and Haslar (Gosport) and other Royal Naval auxiliary hospitals.

Keen to record her experience in an official capacity she obtained permission from the War Artists Advisory Committee and went on to create a stunning variety of images reflecting her wartime life.

This is a scene of sailors in a shelter at RNAH Cholmondeley Castle which was used as a naval auxiliary hospital as well as being the location of the troops belonging to the Czechoslovak government-in-exile. This was also where the Czech special forces that assassinated the high-ranking Nazi Reinhard Heydrich were trained.

The Society helped to purchase a number of Rutherford’s drawings that relate to the activities of doctors, nurses and orderlies, and convalescing sailors and officers.