By Coloured Aquatint by J. Harris, 1804, after the Froissart Chronicle

This early nineteenth-century coloured aquatint by J. Harris reproduces a key illustration from Jean Froissart’s Chronicles (1337-1410), one of the most important historical narrative sources we have for the fourteenth century. Froissart used a colourful and dramatic style to illustrate the events he recorded, all based on both historical and eyewitness sources. For maritime and naval historians his work is particularly valuable for its descriptions of events in the Hundred Years War (1337-1453) such as the siege of La Rochelle in 1372.

Numerous deluxe copies of Froissart’s work were made; there is now one, made in Bruges in the late 15th century, in the collections of the British Library. Aquatints like this one, made four hundred years later, made Froissart’s stunning imagery widely accessible for the first time.

The battle of la Rochelle was fought on 22 and 23 June 1372 between a Castillian fleet and an English fleet. The English were then in possession of La Rochelle and under siege from the French. The English fleet, of around 32 ships, under John Hastings the 2nd Earl of Pembroke, had been sent to the area with troops and money to raise more men to fight the French. The accounts of what happened are confusing but the results clear: most of the English ships were destroyed, Pembroke was captured and the money – £20,000 in gold – taken. La Rochelle surrendered to the French three weeks later.

Images like this clearly show the exceptional challenges of war at sea in the Middle Ages. Fighting was hand-to-hand, in armour, close to shore fought between oared galleys and, as shown here, single-masted cogs.

The Society has published a number of articles on the maritime history of this period, including this note from L.G. Carr Laughton on The Cog, summarizing what we know about features of the ship type known as the cog, from its origins as a coaster and as a tender to bigger ships, to its growth in size as voyages grew longer and its roles became more diverse, both in peace and in war. The particular qualities that made the cog well suited for combat at sea during the period are explained. Much of the Note discusses the cog All Hallows, purchased by Edward I and then repaired and fitted out for war – its complement, dimensions, armament and possible service during the Hundred Years’ War.

The techniques of naval warfare in the run-up to this period are discussed in this article from 1928 by F. W. Brooks. Prior to the advent of the cannon, during the Middle Ages, the ram was probably the most effective piece of ship’s armament, and Greek fire (the composition of which remains a mystery) the most feared. Although many ships carried projectile weapons, such as various forms of ballistae, mangonels, perrieres and espringales, these were almost always used against land fortifications. Ships with castles on the bow and stern as well as fighting tops, manned with warriors wielding bows, spears lumps of iron, stones and other manually deployed projectiles were also common. An illustration of a ballista is provided at the end of the volume

An interesting and perhaps provocative article was also published in 1912 exploring the value of the Medieval artist as a witness of naval and maritime history. Our knowledge of the mediaeval ship being so largely dependent upon the work of the artist of the time, it seems proper that the naval archaeologist should make some enquiry into that person’s character and attainments, and the state of his mind. The enquiry here set out suggests that there is strong evidence of distortion, and that proportion was not the artist’s strong point. 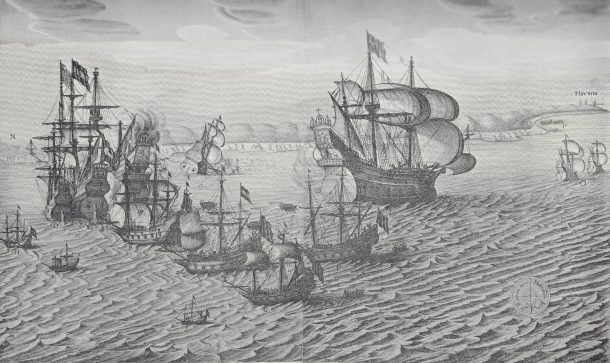