The Goulden Leeuw Engaging the Royal Prince at the Battle of the Texel, 11 August 1673 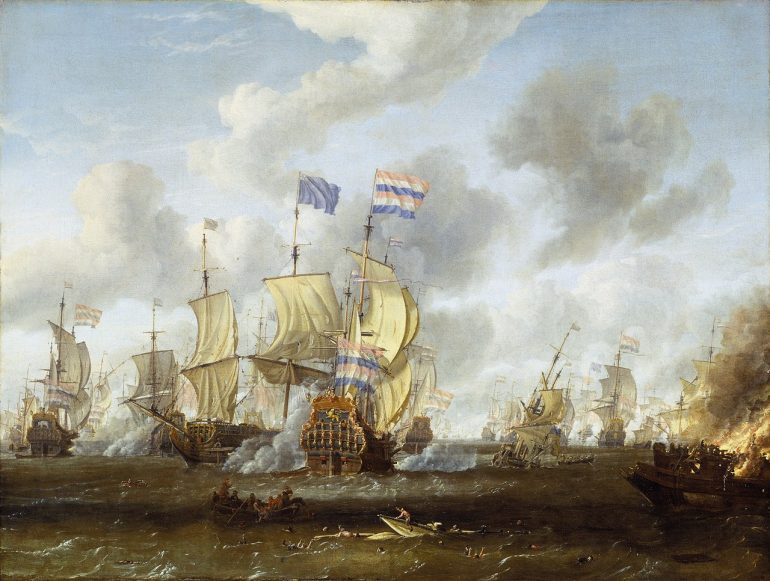 This image shows an important moment in the Battle of the Texel, fought on 11 August 1673 between the Dutch on one side and the English and French as allies on the other. The Allies sought to lure the Dutch away from their coast, defeat them and subsequently launch an invasion.

As was usual in this period the battle did not evolve as intended, and there was notable disunity among the allied fleet; perhaps the result of confused signalling and language barriers; perhaps through cold calculation and deliberate obfuscation by the French. The battle was a tactical draw, but on balance a strategic success for the Dutch who ultimately kept their coast secure form allied invasion.

The scene shows the one area of the battle where the fighting was notably hot as Sir Edward Spragge, the Admiral of the allied rear squadron, engaged the commander of the Dutch rear squadron, Lieutenant-Admiral Cornelis Tromp. Tromp and Spragge were old rivals, having fought each other at the battles of Lowestoft (1665), Solebay (1672) and Schooneveld (1673). Spragge’s obsession with duelling Tromp and Tromp’s skill in isolating Spragge are also important reasons for failed allied unity.

The image was painted by Abraham Storck, a Dutch artist who was born and worked in Amsterdam. His father was a painter and so too both of his brothers. Storck became notable influenced by the work of two other famous Dutch maritime artists of the time, the father and son both named Willem Van der Velde. Interestingly, this specific event at the battle of the Texel was also painted by the younger Van der Velde, another image that the Society for Nautical Research helped to purchase, allowing us to compare the styles and techniques of both Storck and one of his major influences.

Storck is renowned for depicting ships rigging with great accuracy. Here he shows the lavishly decorated stern of Tromp’s Golden Leeuw’s in immense detail as well as the foredeck of Spragge’s Royal Prince. Note also the carved elephant depicted on the stern on the Dutch Oliphant to the left, his depiction another interesting parallel with an image of the Oliphant created by one of the the Van der Veldes, this time the Elder.

Storck was also renowned for depicting with great skill and attention to detail bystanders, passengers and other witnesses in his paintings – something he has clearly spent time on here with an array of human figures in the foreground struggling and gesturing in the sea. Small boats attempt to rescue those that are swimming; one figure sits on the topmast of a ship that has already sunk. To the right of the paining a similar scene is shown unfolding, as an English ship sinks by the bow.

The Society for Nautical Research has published a number of articles on this period in the Mariner’s Mirror including a biography of Tromp from 1954 which concentrates on personal details, starting with his apprenticeship at sea under his father, which ended when English pirates killed his father. It examines his early both merchant and naval service, his time as a Barbary slave before examining his time with the Dutch Navy ashore and at sea with his victories against the Spanish at the Downs and the Dunkirkers, before his death at the battle of the Texel, shortly after the fight depicted here.

This article from 1959 offers a detailed survey of the naval battles of the Third Dutch War (1672-1674) and paints a picture of large Anglo-French and Dutch fleets dancing a pavane. The Battle of Sole Bay, Schoonveldt and Texel were inconclusive.  De Ruyter, acknowledged grand-master, was as ill-served by his officers as was Prince Rupert who successfully took a fleet of fifty sail out of the Thames, against enemy, and wind; and a fleet of a hundred sail within the Dutch sands. And yet, the experience gained produced changes in tactics, in signalling and in the size of ships-of-the-line which lasted until Trafalgar.