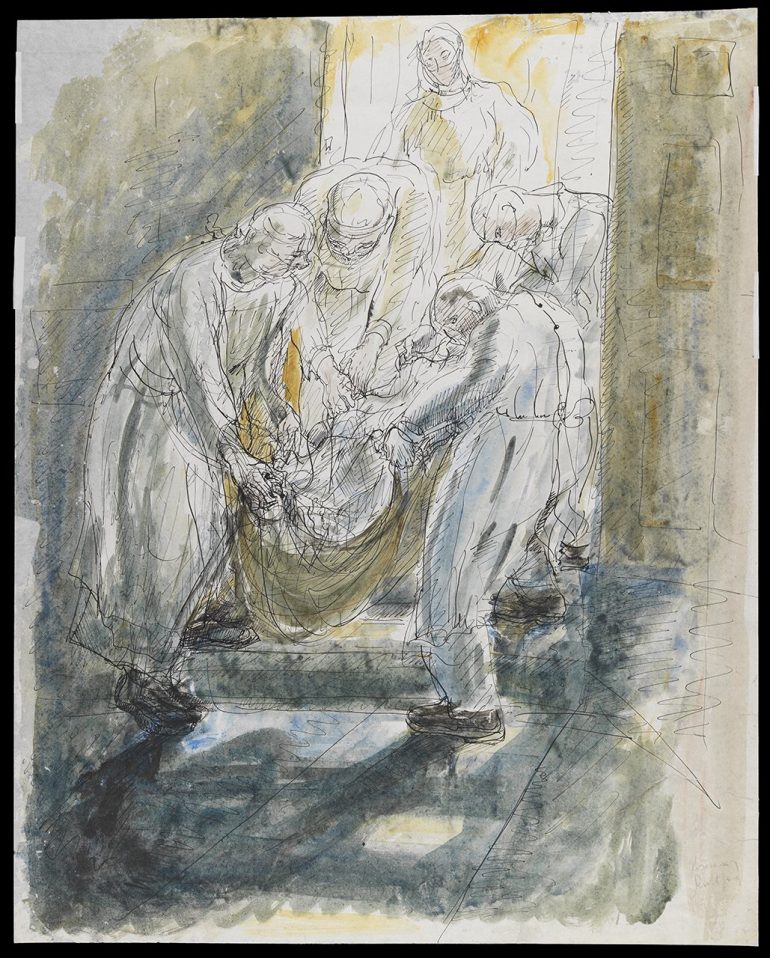 Rosemary Rutherford (1912–72) trained at the Slade School of Art and exhibited at the New English Art Club prior to the Second World War. When war broke out, aged, 27, she joined the Voluntary Aid Detachment of the Red Cross.

She performed a variety of jobs which included working as a nurse in the Royal Naval Hospitals at Chatham and Haslar (Gosport) and other Royal Naval auxiliary hospitals.

Keen to record her experience in an official capacity she obtained permission from the War Artists Advisory Committee and went on to create a stunning variety of images reflecting her wartime life.

This emotive visualisation of an operating theatre shows orderlies carrying a patient through a doorway and is reminiscent of artwork which deals in this way with Christ’s descent from the cross.

The Society has published a number of articles on medicine and the sea including this, from the Mariner’s Mirror in 1993, of an unusual and well documented case of a woman who was licensed to practise medicine and surgery. And this more recent article by Sir James Watt, formerly Surgeon Vice Admiral of the Royal Navy explores both Naval and Civilian Influences on Eighteenth and Nineteenth Century Medical Practice. The article considers how naval and civilian medical discoveries, attitudes and practices influenced each other during the eighteenth and nineteenth centuries. Topics considered include the role of citrus juice in combatting scurvy, quinine and malaria, bloodletting, water purity and cholera, timing of amputations and mortality, healthcare in the first fleets to Australia and in the Crimea, use of antiseptics in surgery, anaesthesia, and statistical analysis and evidence based medicine. The role of the Medical Society of London and Haslar are also considered.