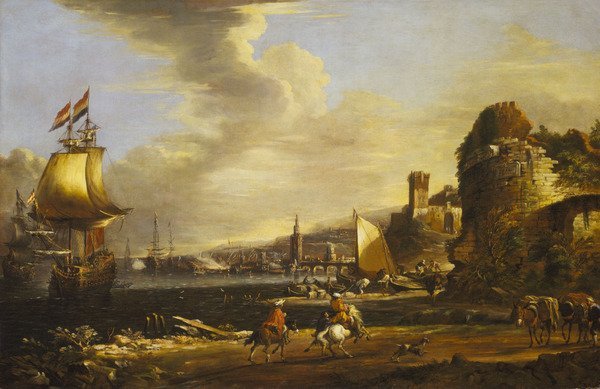 This painting shows an impression of the port of Genoa in the mid-seventeenth century. On the left is a Dutch man of war with more shipping in the background. One ship has just fired a salute to port. Further to the right smoke rises from the hull of a ship, possibly evidence of ‘breaming’ – a process in which burning material was applied to or under the ship’s hull to loosen weeds and barnacles which slowed ships down. The city’s towers and bridges are clearly visible. In the foreground two mounted gentlemen ride at some pace along the shoreline and perhaps the rider in front has been stopped by a servant or is otherwise struggling to control his master’s horse. To their right are heavily laden donkeys. A ruined tower looms over the men.

By this period the heyday of Genoa as a Mediterranean trading city to rival Venice had passed. It was invaded by a French-Savoian army in 1625 in the mid-late 1650s – a handful of years before this painting was created – suffered a severe outbreak of plague which killed almost half the population.

The artist, Adriaan van der Cabel, was born in Holland but moved to Rome in 1656 and lived there for the next twelve years. His art became heavily influenced by an Italian style, clearly visible here.

The Society has published a number of articles on the maritime history of Genoa including the, ‘The First Crusade as a Naval Enterprise’ from 1997 which explores how ships came from Genoa, Pisa, and Venice, Flanders and England.

The practice of ‘breaming’ as illustrated in this painting was rendered obsolete by the subsequent use of copper to sheath ships’ hulls. The development of this process can be followed in a number of articles on the introduction of copper sheathing.