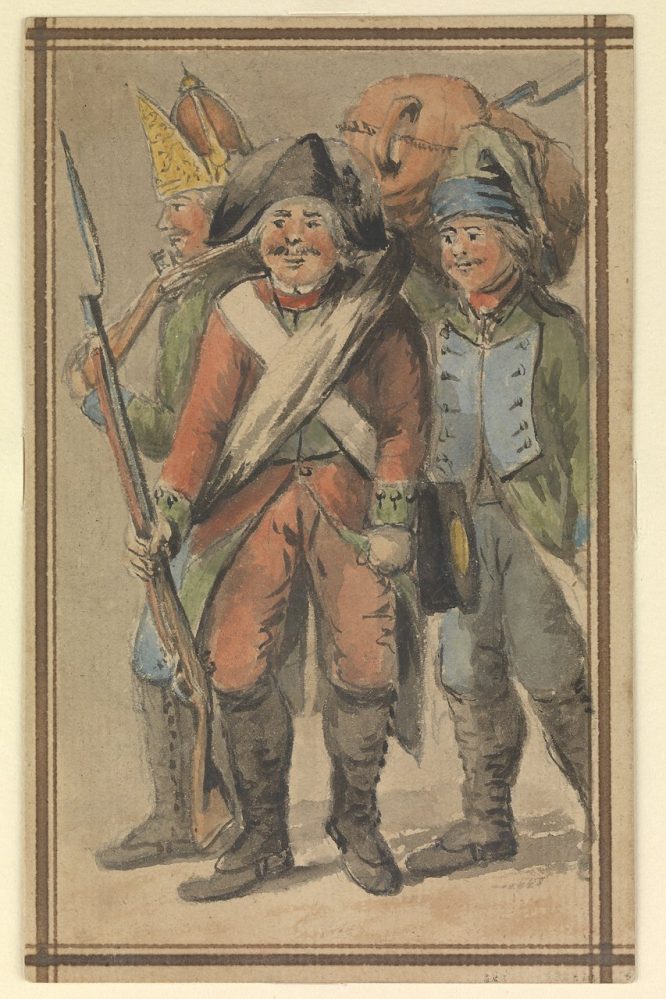 This is just one of seventy-three sketches by Gabriel Bray that were preserved in an album and purchased for the National Maritime Museum by the Society for Nautical Research’s MacPherson Fund in 1991.

The artist, Gabriel Bray, served as a second lieutenant on the 38-gun HMS Pallas between December 1774 and September 1775. This image of a waterman in Portsmouth is signed and dated ‘Nov 74’ and was thus made just before Bray sailed for the Caribbean. Such images of the people who occupied the everyday maritime world of the eighteenth century are exceptionally rare.

You can read more about Bray and see more of his work here and a Lieutenant’s Log for Bray’s Journey to the Caribbean in 1774 survives  at the National Maritime Museum in Greenwich. The archival link is here. The Captain’s Log also survives at the National Archives in Kew, Ref: ADM 51/667.

This image depicts three soldiers. They are believed – with the possible exception of the soldier in the red coat – to be non-British soldiers, most probably German. British sailors regularly crossed amicable paths with European soldiers serving as mercenaries in British wars. This was particularly the case in the late 1770s when Britain was fighting the war of American Independence. During the war nearly a third of all troops sent to America on British ships were German of one sort or another, but collectively known as ‘Hessians’ because the majority came from the German state Hesse-Kassel. A detailed history of German auxiliary troops serving in British ranks was written in 1884 by Edward Lowell.