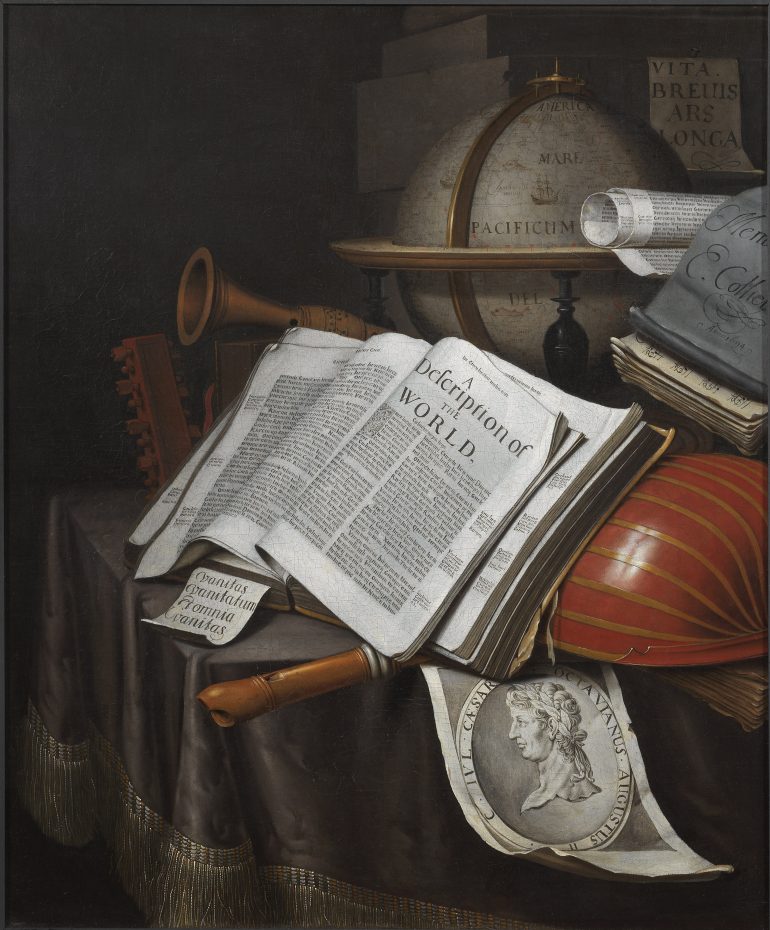 A still life by the Dutch Golden-Age painter Edwaert Collier who specialised in such scenes known as ‘Vanitas’. These were symbolic works which emphasised themes such as the transience of life, the futility of pleasure and the trappings of wealth with other hidden political and social commentary. This particular image, widely considered to be one of Collier’s best, is composed with a distinct maritime theme which is why it was purchased with the help of the McPherson fund for the collections on the National Maritime Museum. It is the only still-life painting in their collections.

Collier arrived in London in 1693 and painted this the following year, specifically for the English market. The globe is shown turned to the Pacific Ocean. The explorer William Dampier had returned from his circumnavigation in 1691 and just a few years after this painting was created he published his charming and faithful account of his Pacific voyages ‘A New Voyage Round the World which raised interested even higher.

Collier has also included a copy of one of the earliest British almanacs ‘Rider’s British Merlin’ – issued form 1656-1830 – which contained a calendar with weather, astronomical and astrological information. Musical instruments, sheet music, and an engraved portrait of Augustus point towards the brevity of human life, pleasure and ambition, and Collier’s adds his own written statement: ‘Vita brevis Ars longa’ [Life is short, art is long] and ‘Vanitas Vanitatum Omnia Vanitas’ [Vanity, Vanity, all is vanity].

The composition is thus a commentary on the human attempt to map and understand the world and is linked to an explosion of interest in the unexplored Pacific Ocean in the 1690s.

The Society has published a number of articles on themes that touch this painting, including this article on Dampier’s subsequent voyages of 1703, this article concerning Alexander Selkirk’s experience in the Pacific, the inspiration behind Defoe’s Robinson Crusoe and this article on a general survey of Britain’s early exploration of the Pacific.