Naval Strategy and Industrial Mobilisation at the Twelfth Hour: the Scheer Programme of 1918 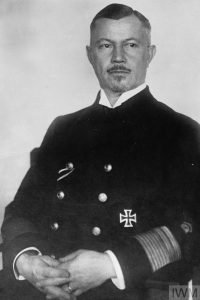 Von Tirpitz, politician and shipbuilder, had an extraordinary impact on German naval thinking. He became the architect of the High Seas Fleet and his strategic ideas took on the nature of holy writ within the naval service. He did not, however, support the research and development of the submarine and Germany started the war with a modest 28 U-boats in service and 19 under construction. The Battle of Jutland in 1916 brought into question the von Tirpitz strategy and forced naval leadership to employ U-boat warfare whilst it debated the nature of an effective strategy against the Royal Navy. Embracing the U-boat and commerce war as Germany’s best alternative the Scheer Programme emerged as the navy and industry addressed the problem of how to build submarines in sufficient numbers quickly, to threaten British naval supremacy. With an initial goal of 257 new boats the Seekriegsleitung (SKL) Great Construction Programme was proposed “as a twelfth hour attempt to save everything”. In reality after the strain of four years of war, with severe skilled manpower and material shortages, the Scheer Programme became unfeasible. Rather than a possible morale booster for the whole officer corps, to those naval officers labouring under the pressures of war and desiring to preserve a cherished institution, the Scheer Programme seemed attainable. The SKL expected to fight its final battle of the war on the North Sea with a substantially increased U-boat force or to use the force to bring about a more palatable peace. The Scheer Programme, as well as redefining naval strategy, should then assume a greater understanding of the last months of the First World War.