The approaching new year, 2021, marks the 100 year anniversary of the Washington Naval Conference. This event, the first multilateral naval disarmament conference in modern history, brought delegations from nine different nations to Washington D.C. to discuss naval armament reductions and interests in the Far East. The conference resulted in multiple treaties that affected the future of naval warfare and international relations. Arguably, the most influential agreement signed was the Five-Power treaty which limited the warship tonnage of the five most powerful signatories, the United States, Great Britain, Japan, France, and Italy.

200 years ago, the US Navy was actively engaged in counter-piracy operations in the West Indies. The actions of the swashbuckling crews onboard ships such as the brig Enterprise a​nd​ ​sloop of war ​Hornet​, would cement a heroic legacy of the early 19th-century American naval forces as they fought to clean up the pirate-infested waters of the Carribean Sea.

And 300 years ago, in 1720, Russian and Swedish naval forces were embroiled in the Battle of Grengam in the Baltic Sea. This battle, the final ​guerre d’escadre ​of the Great Northern War, led to the signing of the Treaty of Nystad in 1721, effectively shifting the balance of power in Europe for decades to come. 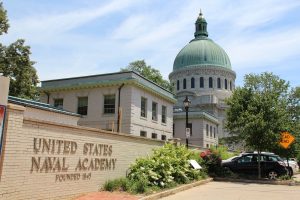 The History Department of the United States Naval Academy invites proposals for papers to be presented at the 2021 McMullen Naval History Symposium on ​any topics related to American or world naval and maritime history.​

Proposals should include a one page vita and an abstract of no more than 250 words which summarises the research and its contribution to historical knowledge, ​collated in a single PDF or Microsoft Word file.​ Panel proposals (made up of three presenters, a chair, and a commenter) are highly encouraged, and should include all relevant material on the presenters, as well as a one page vita for the chair and commenter.

Proposal deadline​: 16 February 2021. Email proposals to ​navalhistorysymposium@gmail.com​ by midnight. ​The program committee anticipates this year’s conference may be be presented in an all-virtual format due to COVID-19 restrictions. ​​A policy on travel stipends will be announced following a final decision on format. ​​The USNA History Department will make an announcement confirming the format of the conference by May 2021 and will announce a draft program by mid-June; papers are due to the committee and to panel chairs/commenters by 16 August 2021.

On-line registration for the conference will begin in late May of 2021. There will be no travel stipends available due to the virtual format of the conference. Financial support for this conference comes from the generosity of the McMullen Sea Power Fund established in honor of Dr. John McMullen, USNA Class of 1940. The committee will publish a volume of proceedings in the ​New Interpretations of Naval History ​Series, containing a selection of the best papers presented, at a future date.

Further information on the 2021 McMullen Naval History Symposium will be available online at www.usna.edu/History/Symposium​. Specific inquiries may be directed to the Symposium Director, Dr. Virginia Lunsford, PhD, or the Deputy Director, Commander Stan Fisher, USN, PhD via the email address listed above.