A Veritable Volcano”: The Life and Legacy of Admiral Lord ‘Jacky’ Fisher, 20 October 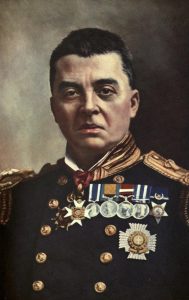 Penelope Fisher, producer of the film “Sea Lord” will be talking at a free online symposium about the life and legacy of Admiral Lord ‘Jacky’ Fisher, First Sea Lord of the British Admiralty (1841-1920) and Sir Winston Churchill’s mentor – her great great grandfather. The event takes place on Tuesday 20th October from 3pm to 5pm and has been organised by Penelope and the Churchill Archives Centre. The event is being held to mark the centenary of Admiral Fisher’s death and to celebrate the transfer of new material to the Churchill Archives Centre.

Penelope, who runs Trident Films, is making a biopic about Admiral Fisher, considered the second most important figure in the British Royal Naval history after Lord Nelson. She says “I want to thank Allen Packwood, director of the Churchill Archives Centre for collaborating with me on this online symposium to commemorate and debate the life and legacy of Admiral Fisher.”

During the symposium, Penelope will be appearing with her father Lord Patrick Fisher in a video where they will be discussing the new documents relating to the life of Admiral Fisher which will be eventually transferred to the Churchill Archives Centre. These include photo albums, books, midshipman notes, academic notebooks, drawing and paintings, letters and press cuttings which have never been seen by the public before.

Allen Packwood, director of the Churchill Archives Centre, says “The aim of this symposium is to put the focus firmly back on the life of Admiral Fisher. We are excited that new documents relating to his life will be transferred to the Centre.”

This event is free to attend, although donations are welcome.

Admiral Lord “Jacky” Fisher was one of the most famous men of his age; an innovator who drove the transformation of the Royal Navy prior to the First World War, introducing the new big gun battleships while reforming gunnery, training and conditions. Born in Ceylon, he was sent away to live with his maternal grandfather in London and worked his way up through the ranks to become First Sea Lord. He was a colourful character with firm opinions, capable of inspiring loyalty and enmity in equal measure. Having retired in 1910, he was brought back as First Sea Lord for a second term by Winston Churchill, then First Lord of the Admiralty, in October 1914. Yet within the space of six months, the relationship between the two men had broken down over the failure of the Dardanelles operation, ultimately costing them both their jobs. Perhaps because he died so soon after the war, perhaps because popular history has focused on the Western Front, or maybe because he did not command a fleet in battle, Fisher is now either forgotten or seen only as a footnote in biographies of Winston Churchill. This symposium will put the focus firmly back on the life and legacy of this ‘veritable volcano’.

15:00 Welcome by Allen Packwood, Director of the Churchill Archives Centre

16:00 Presentation by Great Grandson Lord Fisher and his daughter Penelope from Kilverstone Hall