Coal Steam and Ships: Engineering Enterprise and Empire on the Nineteenth Century Seas. 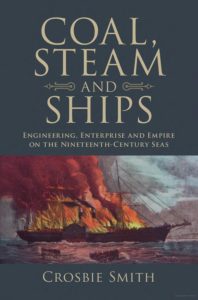 We are delighted to announce that out of sixteen nominations the prestigious Anderson Medal, for the best maritime non-fiction book in 2018 has been awarded to Professor Crosbie Smith for his book Coal Steam and Ships: Engineering Enterprise and Empire on the Nineteenth Century Seas (Published by Cambridge University Press).

The judging panel thought that the book was exceptional. It examined and analysed the origins of oceanic steam navigation with a comprehensive and multidimensional approach which demonstrated how social and religious connections were as vital in the formation of steam shipping lines as technological developments.  They believed that this book was a model example of the need to combine the broadest range of perspectives thus explaining maritime history properly and completely.

It is hoped that the medal will be presented to Crosbie Smith on 23 April 2020 with a ceremony at the National Maritime Museum followed by a lecture, given by the author, and a short reception afterwards.  Details will be announced in the New Year on the SNR website.