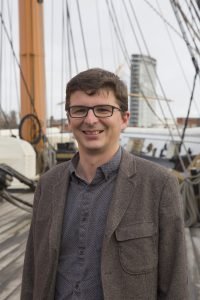 Andrew Baines studied both Quantity Surveying and Maritime Conservation Science at the University of Portsmouth. He has developed a career in the care of historic ships, working first on HMS Warrior, before moving to HMS Victory as curator. He subsequently became Head of Historic Ships and is now Deputy Executive Director of Museum Operations at the National Museum of the Royal Navy (NMRN).

Since joining NMRN, Andrew has guided HMS Victory through one of the most challenging periods in her conservation history.  Working alongside the HMS Victory Technical Committee, Andrew initiated a radical new system of hull support which involved the careful removal of the 1922 cradle and the installation of 134 steel props fitted with load cells to monitor any future movement of the structure.  This work concluded earlier this year and formed the first phase of stabilisation in what is a long and complex programme of conservation, undertaken entirely on Andrew’s watch.

He established the UK’s first historic ship team within the National Museum of the Royal Navy, balancing this against his all-consuming work with

HMS Victory.  As a result, his team were required to support other Navy ships under the care of NMRN, including those at widespread UK sites.

Andrew’s commitment, drive and level of input has far exceeded that which might be expected from an individual in his role and, despite the pressure of his increasing workload, he has been praised by all those who have worked closely with him for his ceaseless dedication to the vessels under his care.