The Society for Nautical Research has just donated £100,000 towards the costs of ongoing research and the continuing restoration of HMS Victory.

“HMS Victory is recognisable around the world as a symbol of Britain’s maritime heritage, and for those of us serving in the Royal Navy today, a symbol of the values and standards that continue to guide us. The Royal Navy and The National Museum of the Royal Navy, in whose care the ship now rests, are very grateful to the Society for Nautical Research for its initiative after the First World War in raising the funds which allowed HMS Victory to be brought into dry dock at Portsmouth. But for their efforts the Victory might well have been lost to the nation. The Society’s support down the years has been constant and this latest very generous gift is further evidence of the SNR’s commitment to conserving this outstanding piece of our maritime heritage”.

Professor Dominic Tweddle, Director-General of The National Museum of the Royal Navy, said: 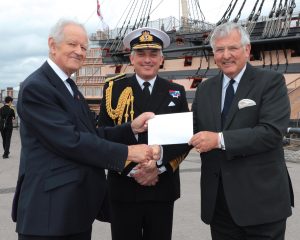 ‘We are remarkably fortunate in having such generous and constant support in our task of ensuring the survival of this famous ship. The dedication of the Society for Nautical Research is a great encouragement to us in our important stewardship of this great vessel. We are delighted that members gather in the Museum for their annual general meeting and then dine on board the ship which they have done so much to preserve’.

The close links between the Society and HMS Victory can be explored here.