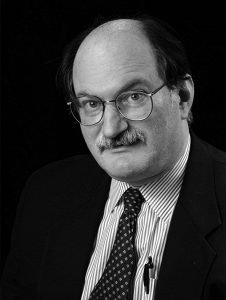 We are delighted to announce that Dr Norman Friedman, one of America’s most prominent naval analysts and author of works covering a range of naval subjects, has been awarded the Anderson Lifetime Achievement Award. This award, given in memory of Dr Anderson, is made on an occasional basis by Council acting on recommendations from the Research & Programmes Committee to mark a lifetime’s contribution to nautical research.

Norman Friedman trained as a physicist but, working at the Hudson Institute, developed his interests in strategy and naval history. At the end of the 1970s he demonstrated a unique understanding of the dynamics of modern warship design in his ‘Modern Warship Design and Development‘. He then moved on to write the standard illustrated accounts of USN warship design history followed by very important works on British warships that embraced over a century and more. His capacity for documentary research is without peer as is his capacity to combine deep technological understanding with an appreciation of political and economic policy matters.  He has also written on wider historical matters, notably the Cold War, and over the years has produced over thirty books winning awards on both sides of the Atlantic. The Society believes Norman has made a unique contribution to nautical research and this is now recognised by this award.

Spiral Development of the Standard Missile

Learning to Fight a Cyber War