An exhibition of the artist Jules George, which has been running since December at the National Museum of the Royal Navy in Portsmouth is set to close on 8 March – so now is your last chance to see some magnificent modern paintings created from the decks of the Type 23 frigate HMS Argyll and the Trafalgar class nuclear submarine HMS Tireless whilst on active service in the Falklands, the Persian Gulf and the Mediterranean.

The exhibition includes almost 60 paintings and drawings that shine a fascinating light on the activities of the contemporary navy. 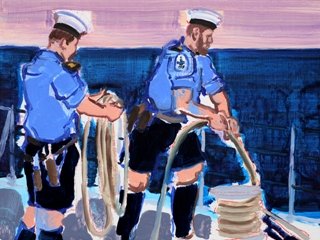 There is also much of interest for historians here. The Falklands paintings, for example, are presented and conceived within the context of the 1982 Falklands War and also the Battle of the Falklands in 1914.

Jules George has exhibited widely as a war artist. He visited Afghanistan in 2010 and was embedded with 11 Light Brigade, who were located in various bases around Helmand Province.

Now is your last chance to see his unique eye capture the modern naval world.