The National Museum of the Royal Navy has launched an interactive map to create a record of the individuals involved in the Battle of Jutland. The map has been made live in anticipation of the new exhibition ’36 Hours: Jutland 1916, The Battle that Won the War’ opening 12 May 2016 at the Portsmouth Historic Dockyard. 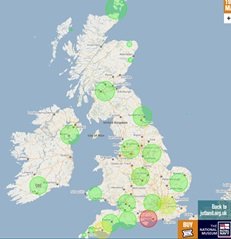 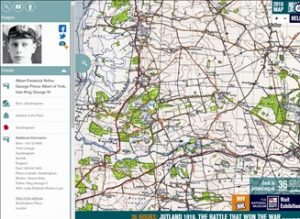 The map will provide an innovative way of charting the impact of the Battle of Jutland. It will convey the ‘human’ story of the battle, highlighting its scale and significance to the First World War, by demonstrating the involvement of people from all over the British Isles and further afield. The project launched with over 6,000 entries from across Britain, already showing the national impact of The Battle of Jutland. Following responses from descendants of Admirals Beatty and Jellicoe amongst others, the Museum is calling on the public to share, discover and remember stories of those connected with the battle. 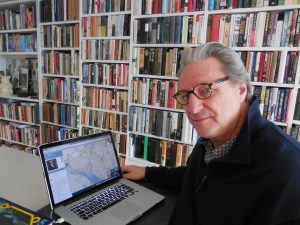 Nick Jellicoe, grandson of Admiral Sir John Jellicoe, commander of the British Grand Fleet, uploading his details onto the map

The Battle of Jutland was the defining naval battle of the First World War, fought over 36 hours from May 31st to June 1st 1916. It is often considered a German victory due to the number of British lives lost – 6,094 seamen to the Germans 2,551. However these figures do not represent the impact upon the British and German fleets. At the end of the battle the British maintained numerical supremacy; only two dreadnoughts were damaged, leaving twenty-three dreadnoughts and four battlecruisers still able to fight, whilst the Germans had only ten dreadnoughts.