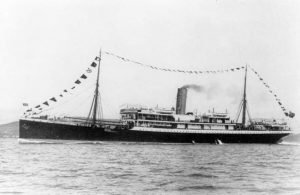 A passenger steamer built in 1905, the S.S. Mendi was carrying the last detachment of the South African Native Labour Corps to France through the English Channel when, at 5am on 21st February 1917, she was rammed in thick fog by the cargo steamer Darro, off the Isle of Wight, sinking with the loss of 615 of her 882 passengers and crew.

This lecture addresses the way in which the Mendi disaster has been recalled over decades and contextualised in terms of public memory at different historical junctures, and how a heroic narrative was constructed with certain elements more pertinently being foregrounded recently to serve a useful purpose in the present.

For more information see this flyer. Both these events are free, but need to be booked in advance. Enquiries should be directed to gateways@kent.ac.uk