We are delighted to announce that, at a ceremony on board HMS Victory after this year’s AGM, the Victory Medal for 2014 was awarded to John Kearon for his outstanding contribution to historic vessel preservation in the UK and abroad.

John comes from a seafaring family with a long and distinguished association with ships and the sea over several centuries. He was introduced to seafaring as a boy during the 1950s on his father’s Irish Sea coaster Halronell.

John is a Master Shipwright and marine draftsman, having served a traditional apprenticeship in wooden boat-building and lofting with John Tyrrell & Sons, Arklow, Ireland, renowned for building superb wooden vessels of all kinds, including Asgard II, the Republic of Ireland’s former Sail Training brigantine, lost in 2008. John helped build her builder’s model with Jack Tyrrell. 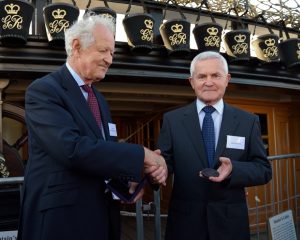 From 1968 to 1973 he served as ship’s carpenter with the British Merchant Navy, sailing with both the Royal Mail and Shaw Savill Line on both passenger and cargo ships.

In 1980 he was appointed Head of Ship-Keeping at Merseyside Maritime Museum (MMM), where he introduced and developed the concept of treating historic ships and boats in a museum standard conservation context. 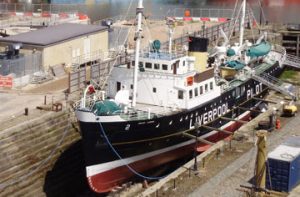 Specifically, John set up public conservation workshops at the museum (amongst the first of their kind), developing conservation programmes of work carried out in front of visitors to promote wider understanding, and conserving vessels such as the Morecombe Bay Nobby Daystar.  In 1982 he provided the technical support for the acquisition of Edmund Gardner, a 700 ton 200 ft. 1953 diesel Mersey pilot cutter, developing the dry-dock repair programme, overseeing the subsequent conservation programme, and providing the technical specifications leading to permanent dry-docking and public display of this ship in the Canning Graving Docks. John’s work on this ship through a mix of permanent staff and trained volunteers set new standards in ship conservation and management which in their time made Edmund Gardner the best conserved ship in the UK. The approaches he developed then are still drawn on today. 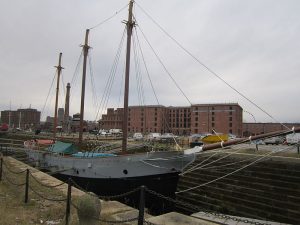 In 1984 John advised on the building of Spirit of Merseyside – a replica of one of the large sailing pilot cutters which served the Mersey in the nineteenth century, built as a sail training vessel for the Ocean Youth Club and operating out of the museum. Also in 1984 John provided conservation advice ahead of the acquisition of the auxiliary powered schooner De Wadden (built Holland 1917), the last sailing ship to trade on the Mersey, thereafter devising the conservation management plan to take the ship back to her original configuration. Later in that decade John was appointed Head of Maritime and Land Transport Conservation serving all the museums in what was to become National Museums Liverpool.

He partook in several expeditions to the Falkland Islands with Mike Stammers, Director of MMM, to study and record the many British nineteenth century ships abandoned there for the Falklands Island Government. In particular the Liverpool barque Jhelum, of 1849 was minutely recorded and a book published; Jhelum – A Victorian Merchant Ship – co-authored with Mike Stammers.

A replica of the Bantry Boat.

Until his retirement in 2006/7, John was not only instrumental in developing further international standards for ship and boat conservation, but also led key conservation programmes for museums outside the UK, notably the conservation of the late eighteenth century Bantry Boat in Dublin, a French Admiral’s barge from the attempted but abandoned French invasion of Ireland in 1796 that was conserved at Liverpool Museums for the National Museum of Ireland.

This work brought him into joining the Advisory Committee on Historic Ships, on which he served (and its successor body) until 2011. During that time he was commissioned by the National Museum of Ireland to undertake the full conservation of Erskine Childer’s yacht Asgard, which was instrumental in the 1916 uprising. John completed this project in 2013, setting new standards in vessel conservation projects – his painstaking coring out of the degraded hull fixings and replacement with new wooden dowels, and his meticulous scarfing of new frames and planking, thereby retaining maximum original timbers, is frankly mind-boggling. He is now completing the publication on this outstanding conservation project.

In parallel, John has also been involved with several RNLI lifeboat conservation projects and produced the conservation programme for Zetland, of 1802, the worlds oldest lifeboat.

He has also supported small maritime museums such as the Lancaster Maritime Museum (owners of the Morecombe Bay trawler Harriet) and has advised the Manx Heritage Trust in their delicate conservation programme for the eighteenth century Manx yacht Peggy.

John joined the Council of Experts for National Historic Ships UK in 2012, and in 2013 became a member of the HMS Victory Technical Committee, where his knowledge of hull fixings and ships timbers is unrivalled.