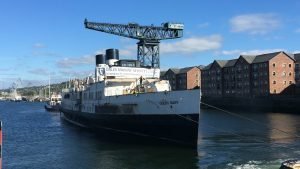 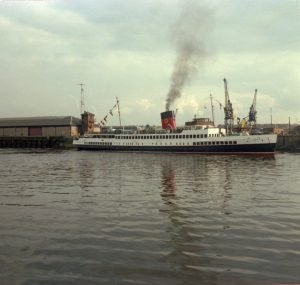 T.S. Queen Mary, one of the oldest Clyde-built steamers in existence, launched in 1933 at Dumbarton, arrived at Greenock on Sunday afternoon in preparation for restoration after being towed up from her former home at Tilbury in Essex. She had been languishing at Tilbury for a number of years in an increasingly dilapidated state after falling into disrepair following her sale in 2008.

A charity backed by the actor Robbie Coltrane, Friends of the T.S. Queen Mary, is raising funds to restore the ship and berth her permanently in Glasgow near the Finnieston Crane as an entertainment venue and education centre. They have currently raised enough money to make her seaworthy but a further £2m will be needed for a complete restoration.