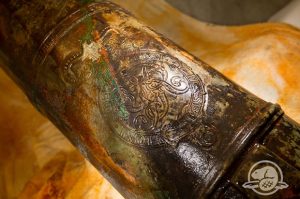 In 1845 Sir John Franklin set out from London in search of the North West passage and never returned. More than thirty search parties were launched between 1848 and 1859 to find his ships and his men but it was not until September 2014 that the wreck of the Erebus was discovered after a five-year search of 1,600 sq km of seabed.

Excavations of the wreck of HSM Erebus have now begun to uncover some wonderfully preserved artefacts including this six-pounder cannon and tackle hook.

Other times recovered include a small patent medicine bottle with an unidentified liquid inside and two brass tunic buttons typical of the ones issued with British Royal Navy tunics after 1812.

The artefacts are now on display at the Canadian Museum of History, and can now be viewed online in a virtual exhibit at the Parks Canada website. 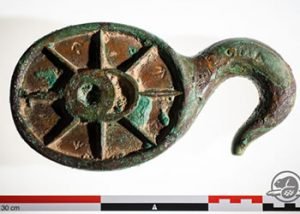 Exploration of the Erebus will continue alongside the search for HMS Terror which is believed to lie further north in Victoria Strait.

Over the years we have published numerous important articles on the the Franklin expedition in The Mariners Mirror which can be viewed here.