To Outsail the Dutch 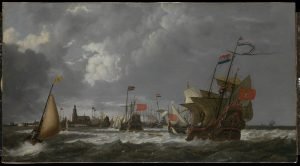 By the middle of the seventeenth century Dutch men-of-war were superior to those of the English. Much attention was given to the art of shipbuilding and to the need for competing with the Dutch in the development of speed, roominess and sailing qualities. The Great Neptune, completed by about the end of December 1623, was, except for the East Indiamen, one of the largest English merchantmen of her time. The Great Neptune was built on traditional English lines with heavy armament as her principal feature.