The Society for Nautical Research recognizes excellence in research into maritime history and contributions to preserving our maritime heritage.

Each year, in memory of Dr Roger Charles Anderson, a distinguished naval scholar and founder member of the Society, the Society awards the Anderson medal for a book on maritime history published during the previous year. 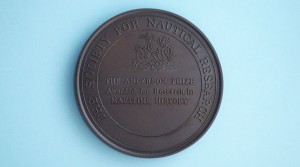 This may be a work of non-fiction covering any aspect of maritime history, such as archaeology, biography, economy, exploration, hydrography, industry, oceanography, science, shipbuilding, strategy, etc. Preference will be given, in order, to the sole work of one author, to joint works by a small group of authors, and then to edited works. Part works will not normally be considered for the award of the Anderson medal.

Nominations may be made by authors, publishers, members of council or other members of the SNR between January and the end of May of the year following publication. They should include full bibliographical details of the work and a short review. They should then be sent by email to the Secretary of the Research and Programme Committee (RPC) whose address is on our contacts page.

How the medal is awarded

In June each year the RPC will draw up a shortlist which will take account of all aspects of the work such as literary merit, original research in primary sources, new interpretation of secondary sources, and contribution to the wider understanding of maritime history. In September the RPC will make its recommendation to the Council of the Society for Nautical Research. The Council will announce its decision at the next Council meeting. The award will be presented in the following April at a reception; the winner will be asked to deliver a lecture related to the topic of the book on this occasion.

From time to time, the Society may award a medal in memory of Dr Anderson to mark a lifetime’s contribution to nautical research.  The award may be given for a substantial body of published work, which could encompass one or more of the following types of ‘publication’: traditionally published books; editing of part works or journals; a significant number of articles in one or more journals, with preference being given to recognising publication in The Mariner’s Mirror; e-books; local studies, such as of a particular area or type of craft; online publishing, such as websites, blogs and podcasts.

Nominations may be made by members of the Society at any time, and should be supported by a brief summary of why the nominee is considered an appropriate candidate for the award.

Awards will be made on an occasional basis (i.e. less frequently than annually). The timing of which will be determined by the Council, acting upon the recommendation of a name from the Research & Programmes Committee, which decides upon the recipients of the award.  The medal is awarded at the AGM of the Society, or at some other appropriate event organised by it.   In 2017 it was awarded to Professor John Hattendorf.

The Centenary Medal was first introduced in 2011 to mark the first centenary of the Society’s work and is rewarded to those who have given exceptional service and assistance to the Society in furthering one or more of its objectives.  This award is not given annually, or even on a regular basis, but given when deemed appropriate.

This year Council decided unanimously that it should be awarded to Dr Susan Rose.

Susan was first elected to Council of the SNR in the 1960s, whilst still working on her PhD thesis on the navy of the Lancastrian kings.  She was later elected as a Trustee under the old ‘Articles of Association’, and later was appointed a Vice President.

She has been closely involved with the affairs of the Society for over half a century, particularly as a member of the Editorial Board of the Mariner’s Mirror and also as Chair, and latterly member, of the Research and Programmes Committee. As an eminent medieval maritime historian over the years she has brought a wealth of knowledge to the Society and is a Fellow of the Royal Historical Society. Continuing her research into medieval shipping  she has published a number of books and articles including Medieval Naval Warfare, The Medieval Sea and in recent 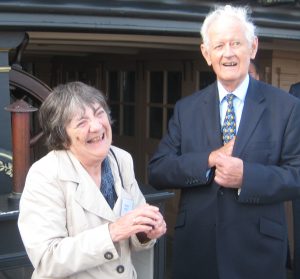 She is currently a Council member and a past Vice President of the Naval Record Society and was also awarded a Fellowship of the SNR in 2015 in recognition of her work in the furtherance of the Society’s objectives.  She is still very active as a Vice President giving support and guidance, particularly to the newer members of the Society.

In 2014 the Centenary Medal was presented to Ltd Cdr Lawrie Phillips, who has been a member of the Society for more than 50 years and has been involved in most aspects of the Society at one time or another. He was Honorary Secretary in the 1980s and served on the Victory Advisory Technical Committee for more than twenty years. He has given many years’ service as a Vice-President of the Society and still serves on the Publications Committee where his professional advice continues to be extremely valuable.

His award was presented on board HMS Victory on 14 June, 2014 by Admiral Sir Kenneth Eaton.

Mark Edwards MBE is a traditional boat builder of Thames craft, particularly skiffs, but also because of his Cornish origins he has built up a considerable expertise in the construction of Pilot Gigs. His knowledge of all types of Thames craft and their origins and development is second to none as is his knowledge of related customs and traditions.

In 2002 he designed and built an eight-oared shallop, The Jubilant, to celebrate the Queen’s Golden Jubilee and also in that year built a replica 17th century wooded submarine, designed by Cornelis Jacobszoon Drebbell, which was successfully tested underwater with two rowers.  In 2004 he built two replicas of the original boats used in the 1829 Boat Race which were races by the present day university crews over the original course at Henley. In 2011-12 he designed and built the 94 foot long Gloriana, a rowing barge powered by eighteen oarsmen as the lead ship in the Thames Diamond Jubilee Pageant.

Mark’s conservation work covers a wide range of powered and unpowered craft and, in addition, he has given employment and training in boat-building skills to a large number of young people, many of whom have come from difficult backgrounds. 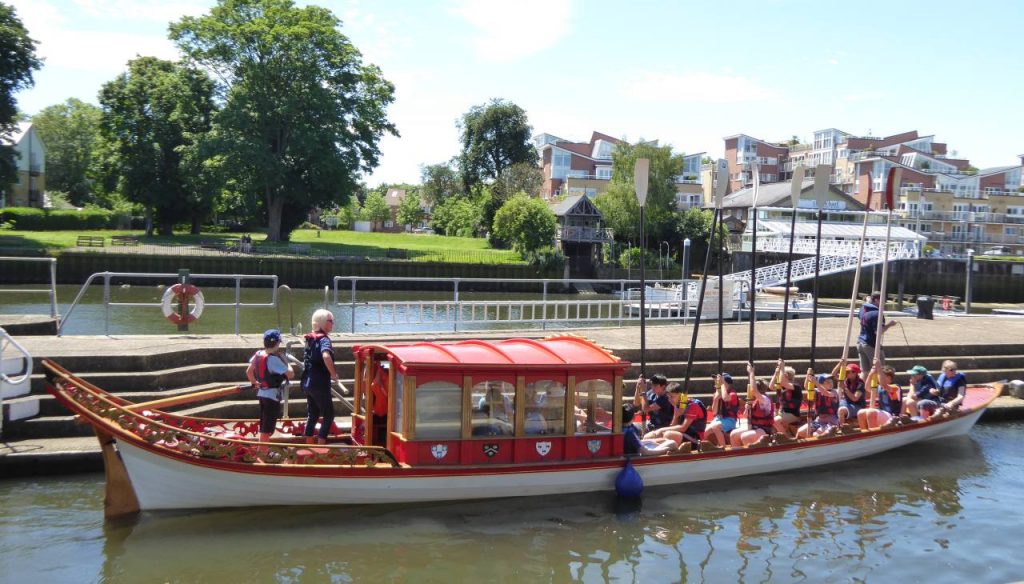 Matthew Tanner is the Chief Executive of the ss Great Britain Trust and was originally appointed as Curator in July 1997. He has not only achieved remarkable results over the years but has demonstrated dedication in the preservation and restoration of the actual SS Great Britain .  He has set new worldwide standards in the conservation of historic ships and also in the scientific approach or interpretation of ships themselves. 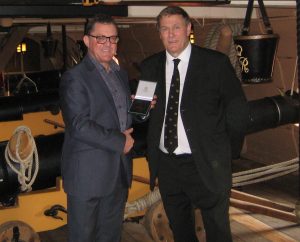 Much of the scientific and historical research he has instigated has been published and he has also formed a partnership and collaboration between the Trust and the University of Bristol which lead to the creation of the Brunel Institute in 2010.  He was awarded the MBE for ‘services to maritime conservation’ in 2007 and the Trust itself has been the recipient of numerous awards over the past fifteen years e.g. UK Museum of the Year and the Micheletti Prize for European Industrial and Scientific Museum of the year.

Although Matthew’s original focus was the conservation of the Great Britain itself he has broadened the scope of the Trust to set the ship in a wider context.  This work incorporates not only Brunel, and his work generally, but also the maritime history of the nineteenth and early twentieth centuries.  He has recently initiated plans to incorporate and restore the adjacent Albion dry-dock, thus bringing ship building and repair back to the heart of Bristol.

This award could be seen as a double celebration in some ways.  Not only does it recognise Matthew’s exceptional dedication and achievements in maritime conservation that relate to the Great Britain but it also reminds us of the link between the Society and the ss Great Britain Trust. The Society and individual members of it, such as Ewan Corlett, contributed much time and effort to save this unique ship  half a century ago and it is now marvellous to see what has been achieved during the past 20 years under Matthew’s leadership and guidance.

George has strong Cornish maritime roots, as his great grandfather was a shipbuilder at Feock.  He served in the Royal Navy for 37 years, undertaking amongst many roles that of Naval Attaché to states in South America.  A keen maritime historian, George then became the Honorary Curator of the Cornwall Maritime Museum from 1993 until the creation of the National Maritime Museum Cornwall in 1998 where he was one of the first trustees.  Much of his time since has been spent developing the Cornwall Galleries and the Bartlett Library, which is now a valuable maritime archive.  He was also responsible for the creation of the Yacht Design Data 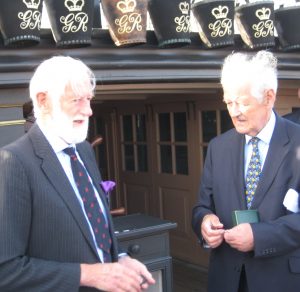 base, which is a unique index of boat plans compiled from 18 different yachting magazines dating back to 1891.

As the initiator and founder of the National Small Boat Register he worked tirelessly in a voluntary capacity to document and record the UK’s small craft.  Most recently, he single-handedly took on the task of cataloguing the EISCA boat collection, working with the auctioneers to salvage craft from the liquidators and shuttling between Scotland and the West Country to advise potential buyers.

With his wealth of knowledge about the UK’s smaller historic craft George sat on the National Historic Ships UK Registration Working Group for a number of years to help develop a new vessel assessment framework.  His level of commitment and personal dedication to the world of historic ships is second to none and his often timely interventions have, in many cases, been directly responsible for saving and conserving significant collections or individual craft that would otherwise have been lost.

Posthumously, for his all too brief life-time work in conserving historic vessels.

Martyn Heighton was awarded the Victory Medal posthumously for his all too brief life-time of work in conserving historic vessels.  From commissioning the replica caravel Matthew, to the Mary Rose Trust, the ss Great Britain project in Bristol, the long term future of the clipper City of Adelaide, and the new steamboat museum on Lake Windermere, his involvements were many and varied.  Throughout, his work with the technical committee of HMS Victory ensured the the highest standards of conservation and restoration.  National Historic Ships UK is now the centre and guardian of our national historic fleet of vessels. Historic ships world-wide will benefit from the book Conserving Historic Vessels.