The Glorious First of June: Fleet Battle in the Reign of Terror 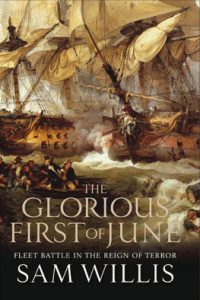 France, early summer 1794. The French Revolution has been hijacked by the extreme Jacobins and is in the grip of The Terror. While the guillotine relentlessly takes the heads of innocents, two vast French and British fleets meet in the mid-Atlantic following a week of skirmishing. After fierce fighting, both sides claim victory.

In The Glorious First of June Sam Willis not only tells, with thrilling immediacy and masterly clarity, the story of an epic and complex battle, he also places it within the context of The Terror, the survival of the French Revolution and the growth of British sea-power.

Dr Sam Willis is a maritime historian, archaeologist and broadcaster. He is the author of the best selling Hearts of Oak Trilogy and Fighting Ships series and has written and presented several documentaries, on both radio and TV, for the BBC. Sam is a Fellow of the Royal Historical Society and the Society of Antiquaries.

The Mariner’s Mirror review of The Glorious First of June as well as the previous two books in the Hearts of Oak Trilogy – The Fighting Temeraire and The Admiral Benbow can be read here.