The Challenge: Britain against America in the Naval War of 1812 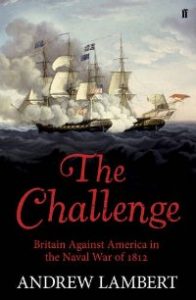 In the summer of 1812 Britain stood alone, fighting for her very survival against a vast European Empire. Only the Royal Navy stood between Napoleon’s legions and ultimate victory. In that dark hour America saw its chance to challenge British dominance: her troops invaded Canada and American frigates attacked British merchant shipping, the lifeblood of British defence.

War polarised America. The south and west wanted land, the north wanted peace and trade. But America had to choose between the oceans and the continent. Within weeks the land invasion had stalled, but American warships and privateers did rather better, and astonished the world by besting the Royal Navy in a series of battles.

Then in three titanic single ship actions the challenge was decisively met. British frigates closed with the Chesapeake, the Essex and the President, flagship of American naval ambition. Both sides found new heroes but none could equal Captain Philip Broke, champion of history’s greatest frigate battle, when HMS Shannon captured the USS Chesapeake in thirteen blood-soaked minutes. Broke’s victory secured British control of the Atlantic, and within a year Washington, D.C. had been taken and burnt by British troops.

The Mariner’s Mirror review of The Challenge can be read here.