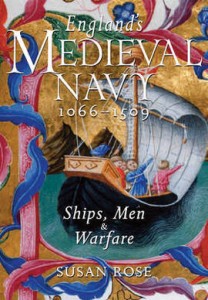 We are accustomed to think of England in terms of Shakespeare’s ‘precious stone set in a silver sea’, safe behind its watery ramparts with its naval strength resisting all invaders. To the English of an earlier period – from the 8th to the 11th centuries – such a notion would have seemed ridiculous. The sea, rather than being a defensive wall, was a highway by which successive waves of invaders arrived, bringing destruction and fear in their wake. Deploying a wide range of sources, this new book looks at how English kings after the Norman Conquest learnt to use the Navy of England, a term which at this time included all vessels whether Royal or private and no matter what their ostensible purpose – to increase and safety and prosperity of the kingdom. The design and building of ships and harbour facilities, the development of navigation, ship handling, and the world of the seaman are all described, while comparisons with the navies of England’s closest neighbours, with particular focus on France and Scotland, are made, and notable battles including Damme, Dover, Sluys and La Rochelle included to explain the development of battle tactics and the use of arms during the period. The author shows, in this lucid and enlightening narrative, how the unspoken aim of successive monarchs was to begin to build ‘the wall’ of England, its naval defences, with a success which was to become so apparent in later centuries.

The judging committee thought that Susan had done a magnificent job in researching and writing about an era that is often neglected and perhaps sometimes ignored in maritime history. Her book, which interpreted a difficult subject in an easily read and coherent way, was also very well referenced and illustrated.

Susan Rose taught at a variety of secondary schools before reaching the relative calm of an appointment as Senior Lecturer at Roehampton University. Her PhD thesis on  the accounts of William Soper, Clerk of the King’s Ships under both Henry V and Henry VI, was published by the Navy Record Society in 1982 as The Navy of the Lancastrian Kings. Since then she has written a number of books and articles on medieval maritime history including Medieval Naval Warfare (2002) and The Medieval Sea (2007). She has also written on other aspects of medieval social and economic history including Calais, an English Town in France 1347-1558, (2008) and The Wine Trade in Medieval Europe 1000-1500 (2011). Current research projects include a study of the medieval English wool trade and a re-examination of Henry V’s naval policy.

The following review of Susan Rose’s book by David B. Clement was published by the South West Maritime History Society.

This book is a large volume beautifully produced to a very high quality by Seaforth Publishing.   The book examines in depth what was effectively the formation of what was to become the Royal Navy and Dr. Susan Rose traces the course from the Viking Longboats to the more complex vessels of Henry V111, and the development of both weaponry and navigation practices.

Such is the quality of this book that Dr. Rose was quite rightly awarded the prestigious Anderson Medal for 2015 for this book by the Society of Nautical Research. This book provides a detailed introduction to a little published area and covers in order the sources for Medieval Maritime History, the Strategic Imperatives and the naval resources of the Crown – which varied from the hiring of merchant vessels, to the maintaining a small number of ‘Royal’ vessels, which depended upon the reigning monarch of the day.

We then turn to examine the various types of ship, the shipbuilding and shore facilities, and the world of the medieval mariner, and the developments in ship handling and navigation.   Dr Rose then turns to War at Sea with accounts of the principal battles during the period, followed by an examination of the development of ‘legal’ (sometimes unofficial) incursions by such as the John Hawleys’ (father and son) of Dartmouth, who were not above capturing ‘enemy’ ships whether we were at war or not!! Corsairs and commanders deal with this aspect and the accounts of raiding into seaside towns, villages and harbours by the French, and Spanish navies, and the Hanseatic ‘traders’ when opportunity allowed. The book then considers the navies of other European States and concludes by examining the Legacy that Henry VIII inherited, following which the true Royal Navy was developed.

In passing the author gives us an insight into recruitment and living conditions aboard, and considers the influence of the Mediterranean galleys – principally from Genoa and Spain.   Altogether this is a fascinating and very comprehensive overview, which frankly I found impossible to put down. Susan Rose has done the world of maritime history an enormous service in producing this carefully researched and most comprehensive work which is complemented by her guide to further reading and the comprehensive 12 pages of notes, together with a very useful timeline covering the period from AD789 to AD1512/3.