This book examines the little studied story of Bellingshausen, and includes the fullest biography of the celebrated Russian explorer ever published. By translating the official reports and other eye-witness documents from the first scientific expedition to the Antarctic of the nineteenth century, conducted 47 years after James Cook’s pioneering venture in the 1770s, Bulkeley transports the reader onto HIMS Vostok, one of the most celebrated ships in the history of the Russian Navy. While her seamen marvel at the aurora and her astronomer is nearly blown overboard in a storm, her intrepid commander tacks his ship between the ice floes in zero visibility, with only the menacing sound of the breakers to guide him. The largely unknown history of the Bellingshausen voyage is comprehensively explored, with thoughtful discussion of the achievements and limitations of the expedition and suggestions for further research. 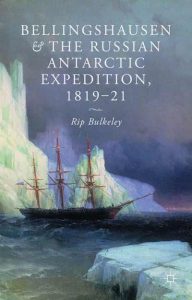 The judging committee thought that Rip Bulkeley’s book was a model of its type. It is based around excellently translated original documents from Russian archives, including Bellingshausen’s official reports and letters to the Admiralty in St Petersburg, both for the first and second ‘seasons’ of exploration. It also has an extended commentary that explains their provenances as well as their strengths and weaknesses as historical sources. Rip Bulkeley thoroughly analyses the geopolitical background, the navigational techniques of the period and the logistical support of the ships. The critical methodological analysis is an absolute model of its type and, taken all together, the book gives a remarkable full, vivid and interesting account of Bellingshausen’s historic voyage. It was deemed a model book and worthy of a wide readership.