Jutland 1916: The Archaeology of a Naval Battlefield

Dr Innes McCartney is the leading British archaeologist of modern naval warfare, contributing over the years to many excellent, ground breaking television programmes. In his doctoral dissertation he demonstrated the value of archaeology in putting the record straight as to U boat losses during both wars in the English and Bristol channels. In his latest work that has received the Anderson Prize, he turned his attention to the wrecks of the the Battle of Jutland in 1916. 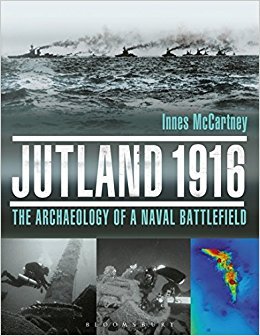 The enormous intellectual achievement of the book is that so much has been found and been thoroughly and forensically analysed. The book explains the innovative multidiscplinary methodology of how the wrecks were identified by using records of the layout of the ships to overlay the actual images found by modern multibeam sonar.

It is a major feat of nautical archaeology. that adds enormously to our understanding of the battle. As he has put it on television, ‘the wrecks do not lie’. The book also raises important questions about their future, many of which have already suffered from crude salvage. ”Jutland 1916, The Archaeology of a Naval Battlefield’ is a truly unique contribution to the literature of the still controversial battle. It further confirms Dr McCartney as pre-eminent in his field of nautical research.