Kings of the Sea – Charles II, James II and the Royal Navy

We are delighted to announce that, out of nineteen nominations, the prestigious Anderson Medal, for the best maritime non-fiction book in 2017 has been awarded to Dr David Davies for his book Kings of the Sea – Charles II, James II and the Royal Navy (Published by Seaforth).  This book, unsurprisingly, has also been awarded a ‘Certificate of Merit’ from the Maritime Foundation, in the Mountbatten Award ‘Best Book’ category, and their citation mirrors our own judging panel’s views in many ways: 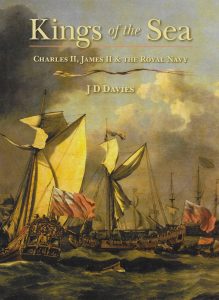 This carefully researched and readable history makes a major contribution to understanding the little known but influential roles played by Kings Charles II and James II in promoting the development of the Royal Navy through major reforms, innovation and exploration.  Historically authoritative, this original work provides an invaluable insight into the emerging concept of sea power.  The author’s lucid style and original approach makes this period in the evolution of the Royal Navy accessible to a wide audience.

It is hoped that the medal will be presented to David Davies at the beginning of May 2019 with a ceremony at the National Maritime Museum followed by a lecture, given by the author, and a short reception afterwards. Details will be announced later in The Mariner’s Mirror and on the SNR website.