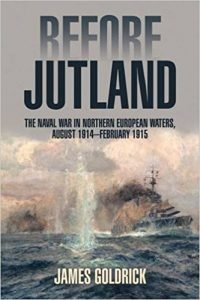 Before Jutland is a definitive study of the naval engagements in northern European waters in 1914–15 when the German High Sea Fleet faced the Grand Fleet in the North Sea and the Russian Fleet in the Baltic. Author James Goldrick reexamines one of the key periods of naval operations in the First World War, arguing that a focus on the campaign on the western front conceals the reality that the Great War was also a maritime conflict. Combining new historical information from primary sources with a comprehensive analysis of the operational issues, this book is an extensive revision of The King’s Ships Were at Sea, Goldrick’s earlier work on this naval campaign. In all, Before Jutland shows not only what happened, but how the various navies evolved to meet the challenges that they faced during the Great War and whether or not that evolution was successful.

James Goldrick AO, CSC joined the Royal Australian Navy as a 15 year old Cadet-Midshipman in 1974 and retired in 2012 as a two star Rear Admiral. He is a graduate of the RAN College, the Harvard Business School Advanced Management Program, the University of NSW (BA) and the University of New England (Master of Letters), and a Doctor of Letters honoris causa of UNSW. He saw extensive sea service with the RAN, RN and USN. He commanded HMA Ships Cessnock and Sydney (twice), the RAN task group and the multinational maritime interception force in the Persian Gulf (2002) and the Australian Defence Force Academy (2003-2006). As a Rear Admiral, he led Australia’s Border Protection Command (2006-2008) and then commanded the Australian Defence College (2008-2011).  August 2011 to March 2012 saw him acting in command of ADFA again. He is a Visiting Fellow of the Sea Power Centre-Australia, a Non-Resident Fellow of the Lowy Institute for International Policy, an Adjunct Professor of UNSW at ADFA and a Professorial Fellow of the Australian National Centre for Ocean Resources and Security at the University of Wollongong.