Between Shoal and Wall: the Naval Bombardment of Akko, 1840 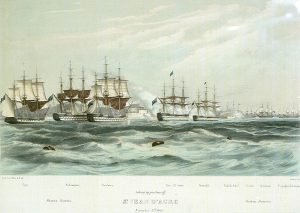 HMS Pique bombarded Akko during the attack by a British–Austrian–Ottoman fleet on the Egyptian-held town on 3 November 1840. Three of her cannonballs were discovered during renovation of the El-Shazliya Mosque in Old Akko, embedded in an inner eastern wall facing the sea. Reduced scale experiments simulating the firing of cannonballs at this wall were conducted by Rafael Advanced Defense Systems Ltd, Israel, in order to measure the depth of penetration as a function of impact velocity. The experimental set-up included a laboratory gun firing at calcareous sandstones (kurkar) representing the wall stones, and monitoring equipment to measure the impact velocity of the projectiles. The measured depth of penetration, combined with data of cannonball trajectory and muzzle velocity, verified that the shots were fired at a range of about 400 m. The results confirm some of the descriptions of the battle, British reconnoitring of the area, and evidence of highly skilled seamanship and manoeuvring of the British ships which deceived the Egyptian defenders. However, some details differ from historical sources and published plans of the battle, where the line of the anchored ships is shown too far from the sea wall of Akko.