Great Sea Fights: The Battle of Tsushima, Part 1 – The Events 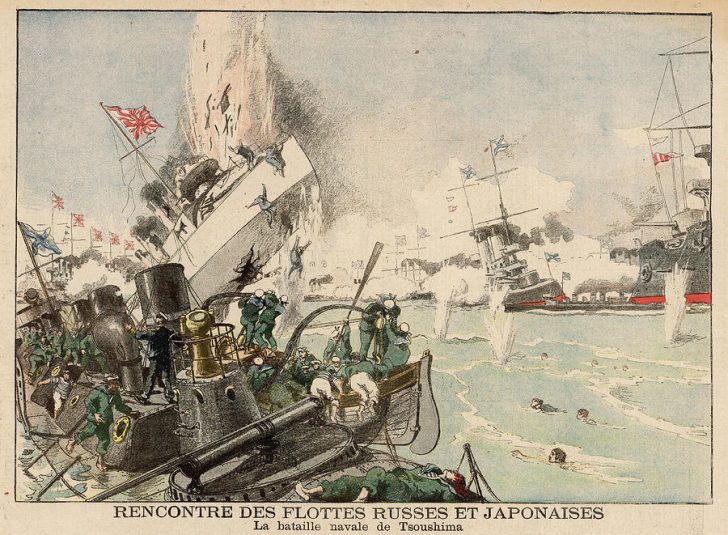 This episode, Part 1 of 3 explores the strategic situation running up to the battle and the events of the battle itself.

The script has been prepared with the help of Tim Concannon and Nicholas Blake.

This podcast episode has been designed to sit alongside an innovative video we have created of the battle. The video shows the animation of an eyewitness battle plan drawn by William Packenham, a Royal Naval officer then attached to the Japanese fleet – who witnessed the events first hand from the decks of the battleship Asahi. The battle plan has been redrawn using the time-stamps given  so that we can now see the positions of the two fleets in real time as the events unfolded – you can, in effect, watch the battle plan be drawn as if you were Packenham sitting at his desk.

To catch up on the rest of the series, listen to Part 2, the Russian perspective and Part 3 the Japanese perspective.

Some background to Togo’s tactic of ‘Crossing the T’

In traditional sea battles from the seventeenth century onwards, the object was to place your ships in a line. Ships had most of their guns on the side, which meant that was how you got your maximum gunpower to bear. Being caught head or stern on opened you to raking fire, with cannon balls doing maximum damage as the heads and sterns were weak and the gun decks completely open from stem to stern, with no protection for the guns’ crews

Nelson changed all that at Trafalgar. His fleet was smaller then the French and Spanish combined fleets, but his men were better trained and could fire two or even three shots to the enemies’ one.

He split his fleet into two and headed straight for the enemy line. That meant that he leading ships, HMS Victory and HMS Royal Sovereign were exposed to the enemy’s fire before they could fire back. They were both three deckers of the largest size and best built to withstand the punishment. The object was to split the enemy line into three and then overwhelm the remnants with better British gunnery. It worked perfectly.

The advent of speed, heavy armour and rotating gun turrets with long range guns was a game changer. If you crossed the enemy line, you had them at an angle for a long time, so that you could fire at them from the side, from the front and from the other side. If you were faster, as Tōgō was, you could do it twice, or even more. All this time, only the forward guns of the enemy could bear, and they would be masked by the ships ahead.

“By taking the general position he did, …..the Japanese admiral preserved to himself interior lines of movement—shorter distances to cover—whatever course the Russians might take…..since he bore from them 45° forward of the beam when they were due south, as he advanced he would bring them more and more behind, throwing most of their battery successively out of bearing. To this doubtless was due the Russians keeping away, even before they opened ﬁre; many of their guns at ﬁrst scarcely bore properly, and, should they continue, would not bear at all.”

Add to that the fact that Rozhdestvenski’s aim was to break through to Vladivostok and Tōgō’s aim was to stop him.

Mahan again: “Under the particular circumstances there were but two alternatives: a charge direct, in line abreast, upon the Japanese ﬂeet, trusting to breaking through in a melee, and some of the faster vessels escaping; or else to accept a formal pinhead battle, by keeping off to insure the full play of their batteries. This was what was done actually, though clumsily; for the double column, with which the Russians ill-advisedly went into action could not quickly develop the full power of the broadsides. It is ill performing under ﬁre manoeuvres which should be accomplished before. This process of keeping off had of course to be continuous to preserve the bearing of the guns.

To get to Vladivostok without ﬁghting was impossible under any probable conditions of speed in the battleships. If instead of heading off gradually, to keep the broadsides in play, the Russians had at once steered east, parallel to Togo, they would with equal speeds have achieved no advantage. To keep off farther, bringing him abaft the beam, would impose upon him the greater distances; but such a course would be but the beginning of away, of a stern chase; and to realize its complete beneﬁt their backs must be fairly turned on Vladivostok, in full retreat.”

Interestingly, this is exactly what Admiral Scheer did at Jutland in 1916, having been effectively enfiladed by the Grand Fleet, between him and his base, he turned tail and fled, aided by poor visibility, and eventually slipping through the rear of the British line under cover of darkness.