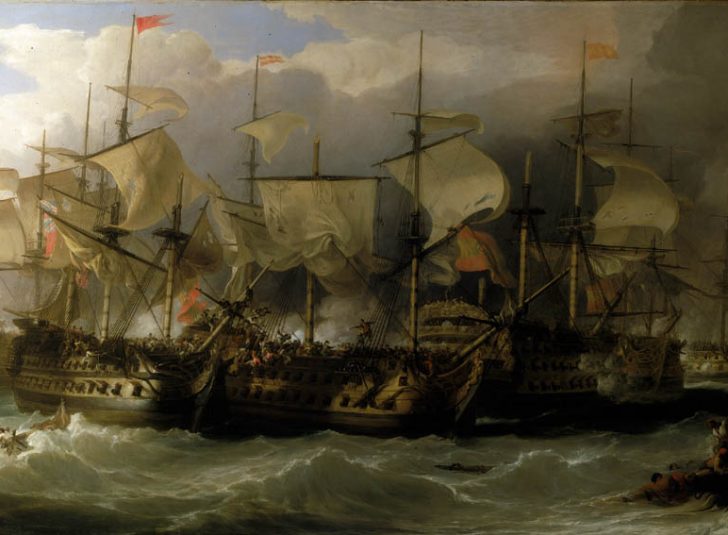 This third episode in our special series on the Battle of Cape St Vincent offers a Spanish perspective on this most extraordinary battle. We hear from Dr. Agustín Guimerá and Dr. Pablo Ortega-del-Cerro, both from the Spanish National Research Centre in Madrid. Dr Guimerá offers an analysis of the battle from the Spanish perspective and Dr Ortega-del-Cerro reads out an extract from the logbook of the Principe de Asturias, the flagship of Vice-Admiral Moreno, and certainly the best Spanish accounts of the battle. Both contributions are presented in English and then repeated in Spanish. A transcription of the podcast can be found below for ease of following.Videos produced with the assistance of the Lloyds Register Foundation and with thanks to the National Museum of the Royal Navy.

Transcription – Please Note: this text comes from the speech of Dr Agustín Guimerá, whose primary language is Spanish.

There are several key factors at play in the battle of Cape St Vincent which determined its outcome.

Superiority of the Royal Navy: It’s a good example of British superiority at manoeuvre, connected with the larger availability of seamen for the British fleets. The British mercantile marine was the biggest in Europe at that time – more than ten times bigger than that of Spain. There was also a British superiority in finance. The British Royal Treasury had enough money for keeping squadrons and fleets overseas and training them properly.

Even worse, in 1796, after the Spanish declaration of war against Britain,  this new Minister of the Navy sent to exile in Ferrol the best naval leader of that time, vice-admiral Mazarredo, commander of the Mediterranean fleet, who had been energetically demanding more resources. He was, therefore absent during the events of February 1797 and the Battle of St Vincent.

The Spanish performance at the battle was determined by several factors: Lack of naval command in Spanish fleet. Vice-admiral Córdoba, General Commander of the fleet, after crossing Gibraltar Strait did not send enough frigates to discover Jervis fleet’s position. At the same time, his fleet was sailing in disorder. (8 o’clock) he sent two battleships to chase to the South. Note that he sent battleships – rather tan frigates as would usually have been the case. So he had fewer powerful ships to face Jervis during the coming battle. (at 10:30 a.m.) Jervis’s fleet appeared on the horizon; a real surprise.

Córdoba in other words was giving a victory to Jervis on a silver plate. Even worse, Vice-Admiral Morales, commander of the vanguard, did not come to help the centre of Spanish fleet till the end of the battle, five hours later! (at 16:00 p.m.).

In contrast there was good leadership in the Spanish rearguard. Jervis separated the rearguard from the main force of the Spanish fleet (11:00 a.m.)

But the good performance of Vice-Admiral Moreno in his flagship Príncipe de Asturias, commanded by the distinguished captain Escaño,  and supported by two other battleships, resisted quite well the attack of the first half of Jervis’ fleet. The fire of the Príncipe delayed Jervis’ tack to the centre of Córdoba’s fleet, which otherwise would have been overwhelmed by the superior numbers of the British fleet.

At 3 p.m. Moreno and his battleships tried to rescue the four battleships captured by the British, which were then at the rear of the British fleet but Moreno abandoned this plan when he realised that Córdoba’s flagship the Trinidad was disabled and surrounded by enemies. At that precise moment (4 p.m.), Morales’ vanguard began to tack, to come to the assistance of the centre of Spanish fleet.

At the same time, the two battleships which had been sent to chase early in the morning, came to defend the Trinidad, and Córdoba’s flagship was saved. Another important part of the battle from the Spanish perspective was the resistance of the battleships San Nicolás and San José.

They were both disabled, with masts and sails – the entire rig – scattered over the weather deck, and without the possibility of using their guns. But after Nelson’s assault, the Spanish resistance was tough. The result of this defence was 196 killed and 168 wounded in both battleships and the killing of both commanders. So Nelson’s achievement was a very hard task indeed.

Another aspect of the battle is the myth of the famous battleship Trinidad, in reality a useless colossus. This giant warship of four decks, built in Havanna thirty years before the battle with 130 guns, a big rig and 5,000 tons displacement, was the biggest battleship of that time. The British were dreaming to capture it and they tried to do so at St Vincent.

But in reality she was a very bad sailor, with poor manoeuvrability. Her windward position at St Vincent caused her to heel over, and the battleship was able to use only the upper battery. Even worse, the inclination of the decks meant that many shot went directly into the sea.

After the battle: After St Vincent, Córdoba was dismissed from the Spanish navy and forbidden from appearing at court. Vice-Admiral Mazarredo became Commander of the Atlantic Fleet based Cádiz. The Spanish learned lessons from the battle: avoid a battle with inferiority in manoeuvre and command, and try to imitate British tactics. Jervis and Mazarredo confronted each other over the next two years and the Spanish navy certainly improved, under the leadership of Mazarredo and his team.

Logbook of the flagship Príncipe de Asturias, of Vice-Admiral Joaquín Moreno, commander of the rearguard of Cordova’s fleet

At nine O’clock our vice-admiral sent the battleships Pelayo and San Pablo to chase to the South. At 9.30 the signal for the formation of the fleet in three columns was repeated. While we manoeuvred to get our place, a frigate, which was to the North, signalled the presence of eight big ships. Our vice-admiral sent us to chase and, exploring the horizon, we discovered to the North West a sloop and a division of bigger ships, probably battleships. We signalled an enemy fleet and came back to our fleet under full sail. Our vice-admiral quickly ordered us to form a line of the battle. The enemy formed a line of battle to leeward. Our line was formed to windward. The foremost of the enemy’s battleships tacked and was followed by the others.

Our ships-of-the-line  Conde de Regla, S. Fermín, Paula and Príncipe were separated from the fleet. This was our position when we began our fire. The two fleets began the action at this time. Around a quarter to twelve we were out of the fight, because the enemy’s battleships had already tacked. But now we also tacked – to attack the enemy’s rearguard from the windward position. The ship Conde de Regla did the same and so we attacked the enemy, with our masts very close together. But the enemy’s battleships fired their guns whilst they were tacking. The penultimate battleship in the enemy’s line tried to attack us [the Príncipe] from the other side, but the Conde de Regla prevented it.

Around 2 pm the engagement ended  in the Spanish rearguard. Our rig was in a bad condition, but we made the necessary repairs to allow us to manoeuvre. The enemy’s position, interposed between the main force of our fleet and our separated ships, together with the great quantities of smoke from the guns, did not allow us to observe the position of the rest of our fleet. It seemed that our fleet was separated in two divisions, just like the enemy. In consequence one half of the enemy’s line tacked and the other wore round simultaneously, placing itself in front of the centre of our line.

This half of the enemy fleet attacked with great superiority the ships S. Isidro, Salvador, S. José y S. Nicolás, which were crippled in the rig and unable to return fire. They drifted down on the enemy’s rearguard. At 2.30pm we were chasing the enemy’s rearguard, where our captured battleships had been placed,  when we observed that the center of our line was under attack and the ship Trinidad, at the end of the line, disabled; and we went to help her. From the  windward the ships Pelayo y S. Pablo reached us.  The ships Pelayo and Conde de Regla opened fire astern of the Trinidad. We followed them and the enemy retreated.

It’s well known that after we tacked, following our vice-admiral’s order, we were attacked by the first battleship of the enemy’s line, which was to windward;  we also opened fire until it tacked. Then we tacked several times to reach the windward position, but the enemy manoeuvred to avoid it, in spite of our fire. Our action delayed the tacking of seven battleships of the enemy. This delay prevented them from reaching the main force of our fleet, including the battleships Trinidad, Mejicano, Concepción.

We [Príncipe] then tacked  after the last of the enemy’s battleship, repaired the rig and then chased the enemy ships until they abandoned their attempt to assemble together, leaving the Trinidad alone. A division which confronts a stronger enemy – manoeuvres to avoid it – and then re-joins its own fleet in order to attack a surprised opponent – is doing a service which cannot be ignored by those who know the art of war.

The order and discipline in the battleship Príncipe is well known; and these qualities prevented a worse fate for the four captured battleships. It must be observed that the battleships Paula and San Fermín could not help the Prince, because they were to leeward. Thinking on these facts, it is easy to deduce that the main force of our surprised fleet, being in a state of disorder, would have been utterly destroyed if the ship Príncipe had not fought half of the enemy’s fleet, delaying it from joining together.